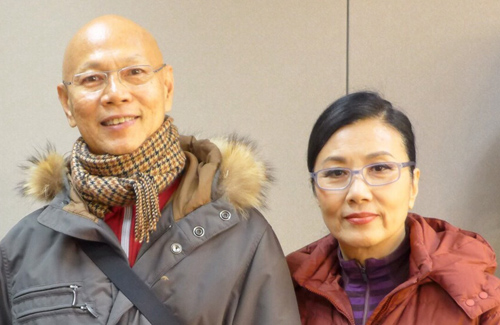 Law Kar Ying (羅家英) was recently invited to be a guest on a ViuTV program hosted by Janet Chow (周家蔚) and Sammy Lau (劉永健). He shared how his career progressed from starring in Cantonese operas at the tender age of 8 to becoming the humorous comedy star that he is well known for today. He was able to make a mark in the film industry when he was invited to act in Stephen Chow’s (周星馳) A Chinese Odyssey <大話西遊> movies. Audiences will remember the scene where he acted as Tang Sanzang and sang English love song “Only You” in a Cantonese operatic style. It was a hilarious scene due to his deadpan face and unexpected high-pitched singing.

Kar Ying personally finds filming dramas to be very boring. Even when Nancy Sit (薛家燕) personally invited him to film a series, he declined. He also found the long work hours to be irrational, “I’m not afraid of being frozen by the company, so I spoke my mind and went to argue with management!”

He also exposed that at one point in time his wife, Liza Wang (汪明荃), did not want to renew her contract with TVB but was personally persuaded to stay by Sir Run Run Shaw (邵逸夫). “At the time, TVB management had gone through a big staff turnover and there was a lot of new blood. Liza was really upset because she felt that she was not being respected by the new production staff, and that her many years of service was all for nothing.”

In the show, Janet cooked a grilled squid with fennel and fresh fruit salad dish for Kar Ying to try. She said, “I actually stole this recipe from Charmaine Sheh (佘詩曼)! I was salivating while watching her cook this on Nicholas Tse‘s (謝霆鋒) show, so I asked her for the recipe.” Kar Ying praised Janet’s cooking skills and described his first memory of meeting her, “I was playing soccer with Timmy Hung (洪天明) and Janet sat silently on the sidelines watching him. I joked that he scored a great catch!”