The TVB anniversary drama Fist Fight <兄弟>, starring Vincent Wong (王浩信), Mat Yeung (楊明), Philip Ng (伍允龍), and Rebecca Zhu (朱晨麗) are entering its final stages in the broadcast, and many fans are sad to see it coming to an end. Of all the characters on the show, Philip and Rebecca’s roles as Iron and Madam Young are the fan favorites, and while their wedding scene in London was one of the first scenes they ever did together, they grew close quickly, and took many quirky photos together to break the ice.

Sharing these photos with fans, Rebecca said, “We came up with a lot of these poses. He’s showing off his kung fu skills while I’m in charge of dance.”

In these photos, Rebecca did a standing split while Philip did a jump kick, showing off their action prowess. Perhaps their “action-packed” wedding photo shoot will become the new trend!

As for a real-life wedding for herself, Rebecca said, “I’ve thought about it. Perhaps I’ll also consider going to Europe to take my wedding photos.”

Reporters also used this opportunity to ask Rebecca whether or not Vincent Wong and Kaman Kong (江嘉敏) will also get a happy ending in the show, to which Rebecca said, “I can’t say anything! I can only say that I think Philip and I are the sweeter pair, because our relationship progressed faster.” 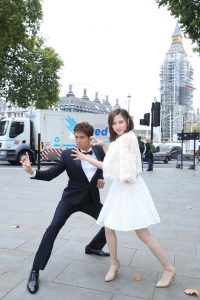 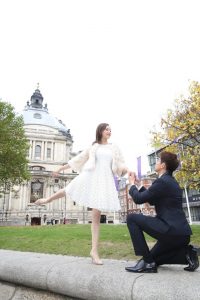 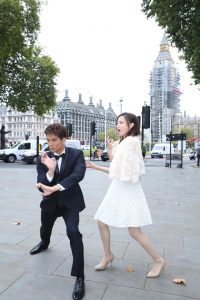 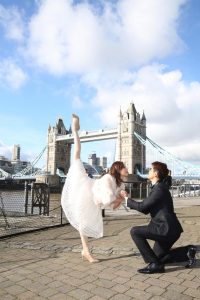