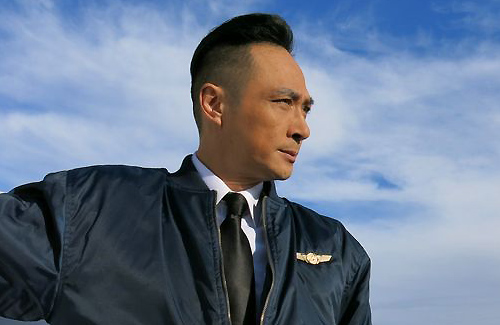 Not only does he play one on TV five nights a week, Francis Ng (吳鎮宇) is also a licensed pilot in real life. Recent reports revealed that Francis obtained a helicopter license over a decade ago, and successfully passed all the required tests in just one month. Although Francis is unavailable for comments, his good friends confirmed the reports, though none seemed interested in flying with him.

Francis developed a strong passion for flight while filming the original Triumph in the Skies <衝上雲霄> series. As his character Samuel Tong would advocate, Francis dedicated himself completely to researching and studying flight theory shortly after filming ended. Since he has a limited amount of time due to a busy schedule, he worked extra hard and passed all the exams in just one try. Reportedly, Francis boasted about his accomplishments, telling friends that he only took one month to obtain his license while others studied for four or five and had to attempt the exam multiple times.

As Francis is currently working in China, reporters reached out instead to his good friends Anthony Wong (黃秋生) and Chilam Cheung (張智霖) regarding the reports. Always the funnyman, Anthony expressed disbelief over Francis’s short study time and joked that Francis must have obtained his license in China. “I wanted to take the test as well over in New Zealand, but it would’ve taken me a full year [to complete all the exams]. It is impossible to get a license in just one month here in Hong Kong or overseas… I don’t have the guts to fly with him. Who knows how skilled he actually is?”

Francis’s Triumph co-star Chilam Cheung also confirmed that Francis does have a helicopter license. When asked, Chilam said that he is not at all envious due to his fear of heights. Earlier, Francis revealed that Chilam contacted him prior to accepting his role in the hit sequel, and said he would only sign the filming contract if Francis will appear as well. When asked to comment, Chilam said, “He said that? It has been really fun working with him. I hope we will have the opportunity to collaborate once again.”