Scamming to Finance Their Ambitions

The story revolves around director Chen Zhiyang (Ngo Ka Nin), who films a controversial scene in a movie that causes the seven-person gang to be blacklisted, thwarting their filmmaking dreams.

A decade passes and producer Herman (Lawrence Cheng), who finds a willing investor for the film, gathers everyone back for a meal. In the vein of the drama’s nonsensical and exaggerated style, the latter unexpectedly dies from being hit by rubble from a rocket. Unable to foot the bill, scriptwriter Sasa (Angel Chiang) cooks up a “mysterious foodie” plan, which successfully gets all of them a free meal. 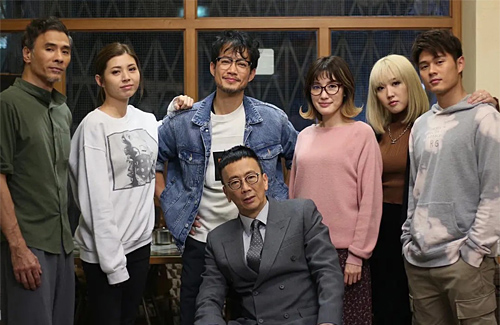 Although the drama is only eight episodes in length, Fraudsters engages with its novel theme and refreshing perspective from that of filmmakers. Its quick pace and light-hearted opening has been promising so far, while it realistically portrays the pandemic’s devastating impact on the film industry – once a glamorous sector, livelihoods of film workers have been ravaged, just like other professions.

While the decline of the Hong Kong film industry and subsequent loss of talents and investors dealing a more massive blow, the premise of “scamming” by those in the business of storytelling for a living lead viewers to ponder if filmmakers who “cheat” audiences are in fact better at scamming than real swindlers. Behind the ludicrousness and dark humor, the passion and commitment of the seven characters in pursuing their filmmaking dreams shine through.

The dialogue is witty, with memorable lines such as “It turns out filmmakers are the best scammers” and “A film is merely a 90-minute scam” showcasing their difficulties in a humorous manner.

Receiving good reviews from its release, many viewers commented that Fraudsters shows TVB at its peak standards in terms of quality.