The TVB Anniversary Awards ceremony will be held on January 10, 2021. Although a total of 22 actresses are nominated in the Best Supporting Actress category, Winki Lai (蔣千霞), Angel Chiang (蔣家旻), and Griselda Yeung (楊卓娜) are the hot favorites to win the award.

In her breakthrough role in  Al Cappuccino <反黑路人甲>, 34-year-old Winki captivated as the domineering triad boss burdened with the responsibility of leading the triad and protecting her two younger sisters. Many viewers praised the actress for her acting strength, and providing comedy relief in her scenes with Owen Cheung (張振朗).

As a graduate of the Hong Kong Academy of Performing Arts, Winki first debuted in 2014’s Never Dance Alone <女人俱樂部> after a recommendation from teacher. Throughout the years, Winki has been growing her range as an actress while impressing her co-stars such as Anthony Wong (黃秋生). Still remaining humble, Winki said, “Whether or not I get praised, I only try my best to play the next role. I can’t act well if I care too much about other people’s opinions.”

Known for her “good girl” image in Come Home Love <愛·回家>, Angel was often typecast to play a student and younger sister. In Al Cappuccino, Angel surprised everyone by playing a sexy and manipulative treasurer in a triad. It was a drastic change for the actress, especially her bold scenes with Tsui Wing (徐榮).

Reflecting on her career, Angel shared, “Waiting, being hopeful, and having enthusiasm for acting is like having commitment. Not being a Miss Hong Kong means I need to gain more experience. At least now I’ve done better than before, and I’m proud to have that experience. Everyone has their own paths, and the most important thing is that I really like to act.”

Griselda Yeung in The Dripping Sauce

After competing in Miss Hong Kong 2001, Griselda played many minor roles before being typecast to widow roles. In recent years, Griselda has been quietly showing her acting strength since starring in Come Home Love. While she played yet another tragic widow role in The Dripping Sauce <大醬園>, she gave her character strength when she stood up for herself against her in-laws.

Leading up to the awards ceremony, Griselda has been busy promoting herself on her social media page. She wrote in a recent post, “Regardless which character you like, or if I ever caught your eye…. For this rare opportunity, please vote for me.” 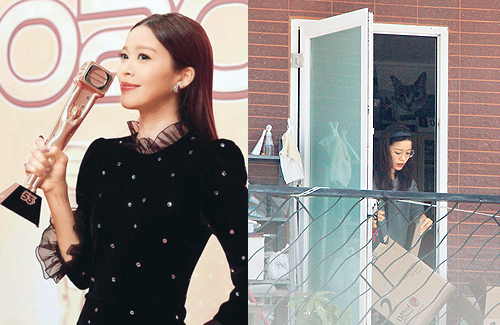