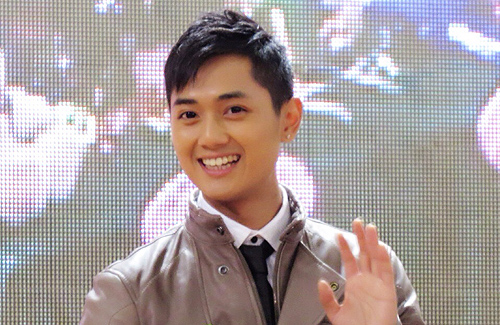 This year will be remembered as Fred Cheng’s (鄭俊弘) breakout year. Fred has been in the entertainment industry for eleven years, and he set out to make his name wider known by competing in talent show, The Voice: Stars’ Legend <星夢傳奇>. His popularity rose dramatically after he won first place and landed a music contract under TVB’s new music label. Aside from a promising music career ahead, Fred continues to take on more prominent roles in television dramas. In Stars’ Legend, 30-year-old Fred revealed his earnest, passionate, and dedicated character. When Fred cried on stage, viewers cheered and hoped he will finally find success after a struggling early career. Although he possesses a youthful face, Fred’s music talent, athletic prowess, and emotive eyes won fans’ hearts and helped him win the “2013 Sexiest Man Alive in China Award” at JayneStars.com. With 5,483 votes, Fred received 22 percent of total votes.

Last year’s Sexiest Man Alive in China winner, Ruco Chan (陳展鵬), came in as first runner-up with 3,917 votes or 16 percent of total votes. Ruco’s acting talent and onscreen intensity continues to make him a favorite and future Best Actor material. Ruco’s intimate scenes in Brother’s Keeper <巨輪> were a first in his career, leaving many eager to see more of his uninhibited performance.

Second runner-up, Wallace Chung, (鍾漢良) received 3,132 votes or 13 percent of total votes. Since the 39-year-old Hong Kong native expanded his career to Taiwan in the 1990s and China in the 2000s, Wallace’s popularity has only grown. This year, Wallace’s performances strayed away from his trademark “beautiful man” roles to more mature film and television characters such as Qiao Feng in Demi- Gods and Semi-Devils <天龍八部>, adding to his sex appeal with viewers.

The complete results of the “2013 Sexiest Man Alive in China” poll at JayneStars.com are available here. Thanks to everyone for voting and supporting our poll, making the race a close and exciting one!

Our “2013 Sexiest Woman Alive in China” poll will be released on Monday, December 30, 2013. Make sure to vote for your favorite sexy female celebrity then!