The skinny actor had to eat much more than usual to increase muscle mass.

Recently, Owen Cheung (張振朗) was fined for unlawful parking, causing his bowl of noodles which he stopped by to “cost” a hefty $300 HKD. The 32-year-old actor explained that he had been training daily with his colleague/ personal instructor Leo Kwan (關梓陽) before the coronavirus pandemic, and had to stick to a high-protein diet which he soon found to be very bland.

As all the gyms have been forced to shutter temporarily, their training progress was halted, prompting Owen to go for a cheat meal of noodles. Winning Best Improved Male Artiste at the start of the year, Owen hopes to buff up and achieve a fitter physique while he is still young, in preparation for challenging action roles which he hopes to take up.

Four Meals a Day and “Clean” Meals on Set

Many colleagues have also reminded Owen to remember to pay his parking ticket, while he blamed himself for being negligent. “I’ll remind myself not to park illegally for convenience’s sake…a bowl of noodles for $300 HKD really makes my heart ache,” said Owen, who was on his way to filming after doing a radio interview. 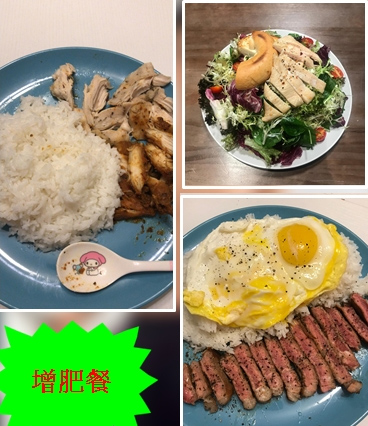 Since the gymnasiums were closed, Owen and his gym buddy Brian Chu (朱敏瀚) – his co-star in Airport Strikers <機場特警> have been practicing push-ups at home and paying attention to their diet, to make sure they do not fall back on their hard-earned progress.

Having a skinny build, Owen confesses that his challenge in getting fit this time was ironically having to force himself to eat enough to gain weight. “Previously, I only had to exercise more while eating less. Now that I want to buff up, I had to gain some weight and then build my muscles. This is more challenging especially when it comes to my diet!”

The actor shared that he had to eat four meals a day during his exercise regime. For breakfast, he eats oats, and four eggs with slices of peanut butter bread. “Actually, I’d be very full already. After exercise, around 4 p.m., I would have my second meal which is a lot of rice along with palm-sized meat. Before 9 p.m., I have to squeeze in two more meals of rice again, so I would eat things I like, such as steak.”

Wants to Take on Action Roles

The actor would make the effort to wake up half an hour earlier to prepare food for teatime and supper breaks (the production team would usually prepare wanton noodles or burger), and request de-skinned chicken rice without gravy for his lunch (usually roasted meat with rice). Weighing  130 to 150 pounds at his slimmest, Owen had to gain a total of 30 pounds for his fitness plan initially, and then lose 10 pounds through muscle-building. Some viewers who saw him filming Legal Mavericks 2 <踩過界2> commented on his Instagram profile that he looked puffy onscreen and asked why. “They said they almost couldn’t recognize me. Finally, there are some results from all that eating,”

Often playing comedic characters, Owen confesses that his goal is not to achieve a bulky build and have a more muscular physique that would enable him to take on more diverse roles. “If I have a chance, I’d like to take on the role of a youngster raising kids. I really like kids. It would be cool if I can show my real-life personality to viewers too. I also hope to take on intense action roles like Ruco Chan (陳展鵬) did in Chinatown <唐人街>.” Owen expressed he wants to accomplish more and challenge himself while he is still young.