Wong Cho Lam had previously mentioned that he brought a team of artistes along to “learn and gain experience” as he bridges performing opportunities for HK artistes in the Chinese market.

Hot on the heels of their first variety appearance on Hello, Saturday <你好星期六!>, the three made a glamorous entrance in a teaser trailer for comedy-drama hybrid reality show On Air! Sitcom (lit. translation) <開播！情景喜劇> on March 12. Publicity photos and media on Weibo show the three artistes walking with swagger alongside veteran actor Lawrence Ng (吳啟華) – each fully dressed in sleek airline attire and flashy shades, which reminded fans of classic scenes from TVB hit airline-themed drama series Triumph In the Skies <衝上雲霄>.

Fans Thrilled, Hope the Stars Can Interact in Cantonese

Inspired by either popular novels or hit film and TV productions, the reality program by DragonTV China will pit eight competing groups of artistes who will present a dramatization of an original series, adapted to an entertaining comedy format. The artistes will then rehearse to put out a final performance under the guidance of industry professionals, to compete for the favor of sponsors – and a chance to have their end product aired on the network’s drama primetime slot.

Despite the limited photos being released for publicity, Chinese netizens are unreservedly excited at the scheduled lineup of Hong Kong artistes, praising their “suave entrance” on social media Weibo. Some called for Bosco Wong (黃宗澤) to also join in, while others suggested that the artistes be allowed to interact on the show in Cantonese, since they expect the Hong Kong stars speaking in Putonghua (Simplified Chinese) to sound “immensely awkward”. 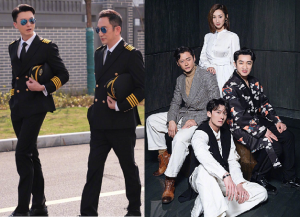 Cho Lam, Vincent and Owen’s names were already on the preview list of artistes due to be on the show in March. Among the rest, only Yi Sha (沙溢), Yang Chaoyue (楊超越), Jackie Li (辣目洋子) and Peng Xiaoran (彭小苒) could be counted as high-profile artistes, hence explaining the intense fan spotlight on Vincent, Owen and Lawrence – who have already acquired a strong fan following in China and built up a solid acting reputation.

As Vincent and Owen had rarely met up with fans in China or participated in variety programs, their appearance on the show is expected to boost viewership ratings, while presenting an excellent chance for the artistes to tap into the attractive Chinese market.