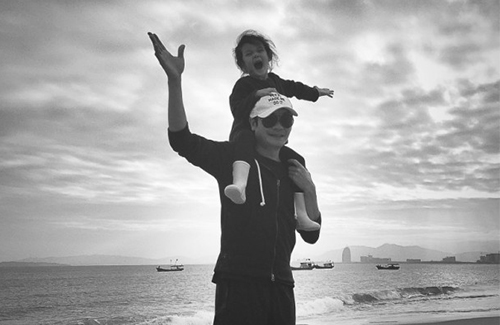 Former TVB actor Gallen Lo (羅嘉良), who has expanded his career to Mainland China, relocated to Beijing for the convenience of his family and work. For the past few years, the 54-year-old had been living full-time in Beijing with his wife, Chinese actress Sophie Su (蘇岩), and their daughter Sela Lo (羅詠婷), who was born in Hong Kong in April 2013.

But with Beijing’s air quality worsening—influencing other cities around the area to also suffer through “toxic” red alert smog—Gallen has decided to move out of area for the safety of his family.

In an interview with the Hong Kong press, Gallen admitted that he has moved out of Beijing to Sanya in Hainan Island, the southernmost province in China, last December. Surrounded by the sea at all sides, the air quality in Hainan is more acceptable with fewer pollutants.

How did Gallen and his family deal with the pollution when they were still living in Beijing? He said, “We try to stay indoors as much as possible. We have a fresh air blower in our house.” (What happens when Sela has to go to school?) “Her school has anti-smog facilities. They would try not to have the students go to the fields as often as they used to, but this is still not healthy in the long-run.” (Is Sela attending school in Sanya now?) “We’re only in Sanya during her break. She’s still attending an international school in Beijing.” (Did their move to Sanya affect his work?) “I do have to fly back and forth a lot. My wife as well.”

Gallen’s apartment in Sanya was purchased a year ago, for 5 million RMB. Perhaps to evade China’s poor air quality, many people are now looking to move to Sanya. Gallen said, “I’ve heard that one sq. meter is now worth at least 40,000 RMB. Good thing I purchased the property last year! I’m just very lucky! When I bought it, I didn’t think about investing. I just wanted my daughter to be healthy, happy, and live comfortably!”