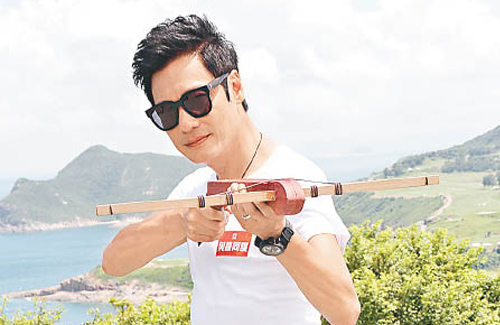 Making his return in TVB’s new modern drama, The Conspirators <與諜同謀>, Gallen Lo (羅嘉良) implied that he will not film another Hong Kong series afterward because of his three-year-old daughter with Mainland actress Sophie Su (蘇岩).

Filming during the intense heat along with Ali Lee (李佳芯), Fred Cheng (鄭俊弘), and Stephanie Che ( 車婉婉), Gallen said, “This outdoors scene had to be done today despite the weather since it was already rescheduled once due to the rain. But this scene wraps up the series. I’ve been back in Hong Kong for months now and my daughter keeps asking, ‘When is dad coming home?’”

In response to whether or not he would want to work with Ada Choi (蔡少芬) for a future TVB production, Gallen added, “I’ll see if time permits, since my wife and daughter are in Beijing.”

Despite the scorching sun on the day of filming, dozens of fans visited the set in support of Fred. Touched, Fred expressed, “They were already here when I arrived. They came this far for me, I will do my best!”

Taking on her first lead role in The Conspirators, Ali has been on an emotional roller coaster since filming started. Ali revealed that her character cries in almost every episode and her emotions have been affected even after getting off work. Ali said, “I’ve been extra quiet these days and I haven’t been going out to dinner with friends as often. That’s why I’m thinking about enrolling in dance classes with a couple of friends. There’s no gender specification, just anyone that wants to learn.”