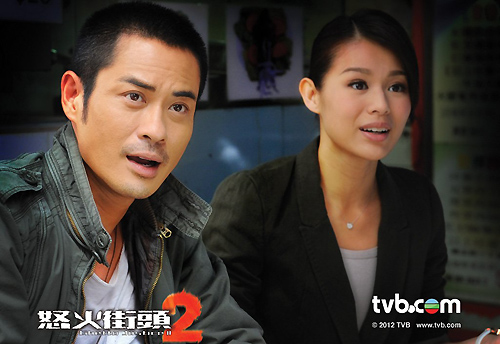 Since Ghetto Justice 2’s <怒火街頭 II> two-hour finale was broadcast on August 25th, netizens have been heavily discussing the ending.  While some praised Myolie Wu’s (胡杏兒) acting, others criticized the plot and circumstances as unreasonable.

TV Queen, Myolie was complimented for her vast acting ability. During the two-hour finale, it was calculated that she had a total of nine crying scenes.  In each scene, Myolie was able to reflect different emotions whether they involved pain, frustration, guilt , or hopelessness.  Netizens applauded her for delivering her performance as “just right”!

In the final episode of Ghetto Justice 2, Kevin Cheng’s (鄭嘉穎) character, “Law Ba,” killed the villain played by Evergreen Mak (麥長青).  In court, Law Ba was acquitted of the murder charges and set free. As Law Ba had won the case claiming the murder was committed due to self-defense, netizens questioned the validity of the outcome.  They debated on whether or not Law Ba would be acquitted of the charges in reality.

According to Hong Kong legal professionals, self-defense can be used as reasoning to murder or causing bodily harm to someone under common law.  As long as it can be proven in court that the force used was for self-defense purposes, murdering or hurting someone is considered legal.  The court has a clear definition of what murder by self-defense entails.  The defendant must prove that he or she clearly believed that the act was necessary to protect themselves and that “reasonable force” was used.

Although netizens can not challenge TVB scriptwriters for Law Ba’s acquittal based on legal grounds, they complained about other circumstances.  It was deemed unreasonable for one of the victims of the collapsed building, “Ah Feng’s”  parents to be 70 years old and have elementary school-aged children.  With their ages, it would be more appropriate if they were grandparents!

Also, as Myolie initially claimed to have killed Evergreen’s character in order to protect Kevin’s character, she should have been charged with obstruction of justice.  If found guilty of the charge, she may lose her lawyer’s license.  However, this was not addressed in the drama.  Netizens claimed that the inconsistency may be due to the recent scriptwriter turnover at TVB, resulting in the noncohesive ending.

Despite the criticism, Ghetto Justice 2 garnered good ratings. In its last week of broadcast, Ghetto Justice 2 averaged 31 points, peaking at 32 points.  To celebrate the success of the drama, Myolie treated the cast and crew to a celebratory dinner.  As Kevin Cheng was filming in mainland China, he was unable to attend. JJ Jia (賈曉晨)  and Christine Kuo (苟芸慧) were also absent.

At the dinner, reporters asked Myolie regarding the recent news of Bosco Wong (黃宗澤) proposing marriage in order to salvage their relationship.  Myolie responded, “Those are rumors reported by the media.  I don’t understand where the news were derived from.  We’ve been busy and have not been in contact.”

When asked if she would give Bosco a chance if he “kneeled on glass”, Myolie replied, “You can’t say it like that.  There’s no such thing.  Everyone says it like it happened, but it will not.  I don’t want everyone to keep talking about it.  What had been reported in the media never happened.  I don’t want to answer hypothetical questions.”

When it was mentioned that Bosco lost significant weight due to depression over the breakup, Myolie said,  “I’m also keeping fit.  I will be filming in Hainan later.  I really don’t know how to answer anymore.  It just never happened.”