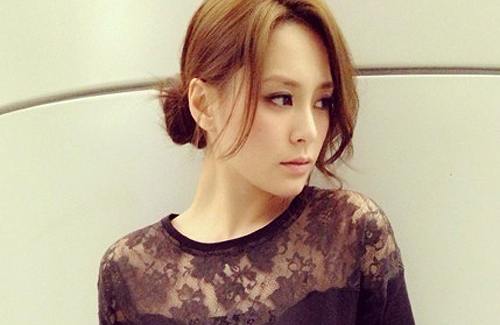 Although she confirmed her breakup with Korean boyfriend, Tyler Kwon, to the Hong Kong press last month, Gillian Chung (鍾欣桐) kept quiet about the details of their split. However, her good friends and label mates,Charlene Choi (蔡卓妍) and Joey Yung (容祖兒), attracted the press’ attention when both made the move to unfollow Tyler on Weibo, leading to assumptions that Gillian’s split with Tyler was not an amicable one.

At a recent press conference in mainland China for her Mandarin-language album, Blossom <桐花>, Gillian was welled with tears when her manager, Mani Fok (霍汶希), gave her a glass tortoise, a token to bless Gillian with a good marriage.

Rumors indicated that Tyler cheated on Gillian with a K-pop trainee when they were still in their relationship cool-off period.

Gillian opened up about her breakup with Tyler, “The problems we’ve had did not come suddenly – it built up overtime. We decided to break up after our transition period. I was definitely unhappy during those times, but they will pass. We have different lifestyles. He is a business person who is very rational in his decisions. Socializing is a part of his job. As for me, I am a girl who likes to stay at home. I don’t like going out. I don’t like attending social events. Because of him, I was willing to go to those events. He loves eating, so I always ate with him. I gained 20 pounds when I was still dating him. In the past, it was easy for me to lose weight, but now, not so much.”

Another reason for the split was because of communication problems. Gillian continued, “I usually don’t understand him when he is talking with his friends. I had to keep asking him about what they were talking about. We had difficulty communicating with each other. Sometimes he could not understand what I was trying to express, and when I couldn’t get him to understand me, I would become really frustrated.”

As for rumors claiming that Tyler cheated on Gillian with a Korean trainee who will debut as a singer soon, Gillian expressed that she did not wish to comment on the matter. Asked if she still considered Tyler as a friend, she said, “We can, but that will take time. He still has a contract with [EEG]. As for now, I will not be collaborating with him. I actually don’t even know if he still wants to work for the company.”

As Korean males are known for their chauvinism, was Tyler’s pride the main reason behind the breakup? Gillian said, “I’m not the kind to feel unhappy about getting neglected. I am also career-minded. I have been working nonstop. Strictly speaking, Tyler is American because he was raised in the United States. The lack of fate is the reason why we could not be together. I am not disappointed with love and I do hope to find my other half soon. I just want someone who can make me happy and will not give me too much stress. As for chauvinistic males, I can let you have your ego when we are in public, but back at home, do not even attempt it. It’s important to understand how to respect and support each other.”

15 comments to Gillian Chung On Breakup With Korean Boyfriend