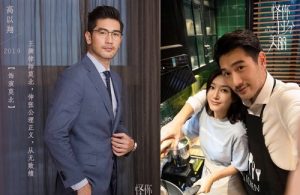 Late actor Godfrey Gao (高以翔) passed away last November due to a heart attack while filming Zhejiang Television’s variety program, Chase Me <追我吧>. However, his last project We Are All Alone <怪你過分美麗>, starring Qin Lan (秦嵐), Wang Ziyi (王子异), David Wang (王耀庆) and Cristy Guo (郭晓婷), has yet to be aired. Although the premiere date is still unconfirmed, 1.2 million iQIYI users have already made plans to stream it on the website.

When the media confirmed Godfrey’s passing, many netizens initially commented that the drama might not be released as it would’ve been inappropriate, and fans would be too heartbroken to watch it. However, after some time, it appears a decision was made to release it. Many fans did not oppose it, but they still feel conflicted about whether to watch it or not. They expressed, “I want to watch it, but I can’t bear to watch it.”

In response to rumors of the drama being broadcasted, iQIYI’s Taiwan website shared that its release is still in discussion, and no plans are confirmed yet. At the moment, they are testing the waters by just putting the prospect of a drama release out there. If it gains significant attention, there is a high possibility that an airing date will be decided. But with the number of people expressing their anticipation for the drama, it looks like viewers will get to see Godfrey’s charismatic portrayal of hotshot lawyer Mo Bei after all.

April 5 marked the 100th day of Godfrey’s passing. Despite COVID-19 fears, many mainland fans took the time to visit and pay tribute to their beloved idol with flowers at his accident site in Ningbo. Others also made plans to send flowers to where he was laid to rest in Chin Pao San Cemetery in Taiwan. According to sources, Godfrey’s statue and monument will be completed in mid-April.