Godfrey Gao (高邑鄉), who passed away on November 27, 2019, was peacefully sent off by over 300 family and friends in a farewell ceremony held in Taipei on Sunday morning. He was 35 years old.

The ceremony, which was held at the First Funeral Parlor located in the Zhongshan District of Taipei at 8 a.m., was decorated with flower baskets, paper lotuses, and over 10,000 paper cranes folded by fans. The entrance poster read, “Flying Free with God. Godfrey Farewell Ceremony.”

An enlarged portrait of Godfrey was shown on the wall with LCD lights, guarded by two large flower baskets. A clear table was placed in the middle, and beside the table were basketballs, Godfrey’s favorite sport. 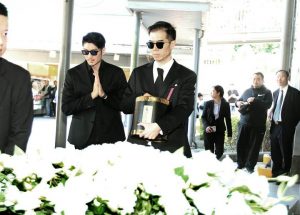 Godfrey’s two older brothers carried his spiritual tablet, while his girlfriend Bella Su (蘇湘涵) walked behind them. Her head was down, and it appeared that she had been crying. Godfrey’s parents followed behind closely, holding each other.

The actor, who among international audiences is best known for his portrayal as Magnus Bane in the 2013 Hollywood film The Mortal Instruments: City of Bones, collapsed while shooting a scene for Chase Me, a Chinese variety show featuring celebrities doing action stunts. He died several hours later due to cardiac arrest.