On the late evening of January 28, Godfrey Gao’s (高以翔) older brother Charles Gao (高宇橋) shared that he is still grieving over his brother’s death in a new post.

Godfrey tragically passed on November 27, 2019 in Ningbo, China while he was shooting a segment for the Chinese reality show Chase Me <追我吧>. He was 35 years old. 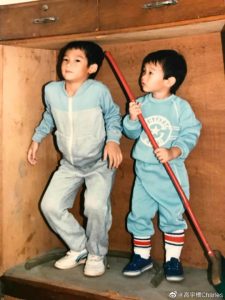 Born in 1984, the rat was Godfrey’s Chinese zodiac.

Since his death, his older brother Charles only updated social media with official announcements in regard to his brother’s funeral proceedings and the management of his assets. It wasn’t until this Tuesday, on the third day of Lunar New Year, when he made a post to grieve his loss.

“Is a luncheon meat and egg sandwich with iced tea really that good? Why is it that I never get bored of it… you just get up and leave after spending 35 years as my little brother. Aren’t you being a little spoiled? I didn’t even have the time to say goodbye… what about the promise that you’ll film me off-roading when you have time? I am still hoping for the day when we can ride our pwn dream cars to race each other! You’re not even giving me a chance to beat you! Okay! You can be the best! Didn’t you say that we’ll enjoy life together till old age? It’s okay. In the scenes that follow we’ll act it out! We’ll walk together! The year of the rat is your year, and I’ll spend it with you! These sentimental thoughts are all trapped in my head, and it’s hard to release them! But in this new year, I want a new start. Thank you all for staying with us! And thank you all for the blessing. Happy new year. Happy 2020 to my little bro! Theo is fine with us!”