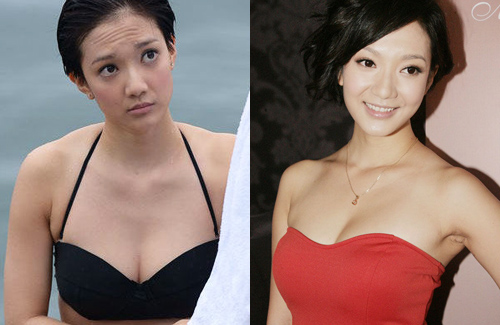 After Grace Wong (王君馨) revealed her status as a virgin, some admired her lifestyle choice, while others doubted her credibility. The 26-year-old devoted Christian revealed that her strict attitude towards sex has led to relationship breakups and made it difficult for her career choice as an actress.

Grace Wong entered TVB after winning the first runner-up title in the 2007 Miss Hong Kong pageant. She has been working diligently to gain recognition, but has not reached a satisfactory level of success yet. Grace’s comments regarding her virginity status sparked heated online discussions and prompted many to wonder, “Are there still virgins left in the entertainment industry?”

Realizing that others may find her admission difficult to believe, Grace said, “I have held the same belief since I was a little girl, that one should save her virginity for her future husband. I’ve had more than 3 boyfriends back in the United States, and I went out on many dates with them. No matter what I do, like hanging out with friends or dancing at nightclubs, I still hold the belief of having sex with my future husband only.”

No Sex while Dating

Many of Grace’s friends respect her decision, but a few men teased her and called her a nun. Although Grace was hurt by their comments, she was adamant about her beliefs. She believes it will be an amazing feeling to have sex with her husband on her marriage night. Grace shared, “If I can look at my husband’s eyes and tell him that I am saving the most precious thing for him, that will be such a sweet feeling. I also imagine my husband telling me that he is willing to save it for me as well. That will be quite incredible and I will be so touched by him.”

Staying true to her beliefs, Grace broke up with her second boyfriend because she did not want to have a sexual relationship with him. “My boyfriend at that time was a white man and I refused to have sex with him after dating for 2 months as he wasn’t the man I wanted to marry in the future. As soon as I said no, he threw a tantrum and asked why couldn’t we have sex if we were in love?”

Grace’s third boyfriend, a Taiwanese man whom she had met during college, respected her strong belief of saving her virginity for her husband. The two had kept their relationship pure as they had no sexual relationship. However, Grace and her Taiwanese boyfriend broke up because she decided to stay in Hong Kong to pursue an acting career.

Being Sexy is a Sin?

In the industry for 5 years, Grace often projected a sexy and seductive image to the audience as she often wears tight-fitting clothes and bikinis. As a devoted Christian, Grace was confused whether she is suitable to be an actress as she will be coveted by male audiences. “As an actress, people will be looking at me, but I don’t want men to look at me in a lustful way. I hate that feeling. I was really confused and my heart was aching.”

Grace had difficulties portraying seductive characters while maintaining her boundaries at the same time. She will not sell out her body and morals to anyone, even if it means she has to leave the entertainment industry.

Struggling with inner conflicts, Grace still wishes to continue her acting career. She needs to compromise with her religious beliefs. In Friendly Fire <法網狙擊> Grace portrays a sexy woman who seduces Michael Tse (謝天華). In one scene, Grace had to wear a bikini to dive into the water to look for sea urchins and had to emerge from the water in a wet swimsuit. In order to get through the scene, she mentally braced herself by pretending to be Angelina Jolie.

Grace had a hard time filming her seduction scene in Tiger Cubs <飛虎>, in which she teased Him Law (羅仲謙) by wearing a revealing nightgown. She had to stop the filming many times during the scene. “I couldn’t accept myself being a seductress even though I understand the producer believes I can do it.” Grace explained.

Afterwards, her fellow Christian friend, Wong Cho Lam (王祖藍) advised her, “You have to accept what you were being born with. You are an actress so you have to express the personality of the character. You cannot judge how others look at you due to your acting roles, or else you will never make it as an actress.” Grace took his advice and she finally believes God has given her a nice figure and she should accept it. She finally learned how to let go of her psychological barriers while maintaining her principals in order to become a successful actress.

Besides acting, Grace has developed a passion for music since winning the Dancing Queen title in Strictly Come Dancing <舞動奇跡>.  She had started writing her own songs and hopes to find a good lyricist to write her stories to express her thoughts. Grace’s ultimate goal is to be a singer as she truly enjoys singing and dancing on the stage.