Although known mainly as superstar Jay Chou’s (周杰倫) wife, Hannah Quinlivan (昆凌)  is more than just a pretty face. The 25-year-old actress has managed to successfully enter Hollywood, create her own fashion label, and is a mother of two lovely children.

Giving birth to her son Romeo last June, Hannah only rested for a month before hitting the gym and training her body for action film Skyscraper with Hollywood star Dwayne Johnson. In order to portray her role as a female assassin, Hannah trained for four months straight and learned a variety of fighting techniques.

Besides filming, Hannah created her own fashion label JENDES and grew her business in less than a year’s time. With over 30 employees working for her, Hannah talks about the origin of her fashion dream. She explains, “I’ve loved designing my own clothing since I was a child. I especially love touching different types of materials and fabrics. Since I’ve never learned design, my company has a professional designer and we would often have discussions. I would draw initial drafts, and they would give advice on what I should change. I’m slowly learning from them.” 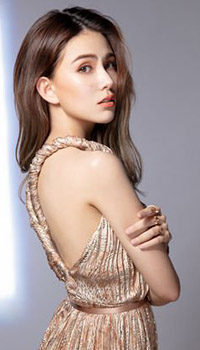 Although a young mother, Hannah understands the value of spending time with her children. Hannah always brings her children to the office.

Hannah’s Instagram is also filled with special moments of the family spending time together. “Before the age of four, they have to play and spend time with me. After four years old, they’ll have school until university graduation. Although it’s difficult to bring them everywhere, my mom helps me.

“When the family is together, we like to go sightseeing in other countries. Leaving the country allows us to be free. I understand that there might be pressure for children of celebrities, and that’s why there’s a possibility that we might move out of the country in the future. I’ll never send them overseas by themselves though.The family has to stay together – I have to go with them or else we’re not going at all.”

What It’s Really Like to Be Married to Jay Chou

Talking about her marriage with Jay, who is 14 years her senior, Hannah said they’re like a pair of childish best friends. While Jay sings to her from time to time, Hannah would perform magic tricks just for fun. She laughed, “He’s not like an older brother. We’re more like friends, a pair of childish friends who likes to watch funny YouTube videos together. We’re definitely on the same channel; we have a lot of common conversational topics and inside jokes.”

Besides sharing the same sense of humor, Jay is a very sweet husband. Recalling the sweetest thing he has done for her, Hannah tells the story of when she gave birth to their daughter, Hathaway, four years ago. For three nights, Jay stayed with her at the hospital and only slept on a folding bed. Because Hannah had a Cesarean-section, Jay took extremely good care of her. Seeing how their relationship has matured since then, Hannah smiled, “Our relationship prior and before the baby is so different. Before, I would always listen to him. After the baby, he listens to me! This happened to a lot of my friends as well. The husbands finally understand the wives’ pain, and they become more caring after welcoming a baby.”