Following the success of the virtual concerts held by music legends Sam Hui (許冠傑) and Aaron Kwok (郭富城) during the pandemic, many music fans have been wondering which legendary pop star will follow suit. It turns out it is none other than Hong Kong superstar Andy Lau (劉德華). The 58-year-old icon will be participating in the Mainland anti-pandemic virtual music show, “Salute White Angels Charity Cloud Concert” <致敬白衣天使公益雲演唱會>, according to the latest poster released. The concert will be live-streamed on May 11 at 7:30 p.m. (HKT). 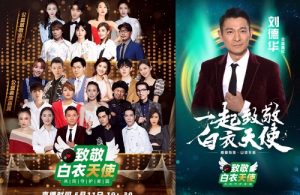 The virtual show is sponsored by several institutions in the Mainland, including Weibo and People’s Daily. A bevy of well-known singers from the Mainland, Hong Kong, and Taiwan are joining in on the special cause to offer their support to those on the frontline. Familiar faces include Jay Chou (周杰倫), Karen Mok (莫文蔚), Gigi Leung (梁詠琪), Jam Hsiao (蕭敬騰), JJ Lin (林俊傑), and Stefanie Sun (孫燕姿).

As the full details have yet to be released, it is unknown what kind of performance Andy will bring viewers. However, it is believed he will deliver a motivating performance similar to Jacky Cheung’s (張學友) act in the “One World” show and Faye Wong’s (王菲) number in the “Believe in the Future” <相信未來> concert.

In February, Andy released a new single ” I Know” <我知道>, which is the Cantonese version of his hit song “Bridge of Love” <愛的橋樑>, in dedication to the selflessness of all medical personnel. Andy had penned the Cantonese lyrics after being inspired by a photo containing the phrase, “I don’t know who you are, but I know who you’re doing it for,” that he saw online.

Besides his own efforts, Andy’s fan club Andy World Club also followed their idol’s steps and provided anti-pandemic support. They donated 3,000 masks to Rehabilitation Alliance Hong Kong’s “One Person, One Mask” campaign to fight against the pandemic.