Married for seven years, Jay Chou (周杰倫) and Hannah Quinlivan (昆凌) have two children, 6-year-old daughter Hathaway and 4-year-old son Romeo. Always be on the go, Jay and Hannah have been travelling around the world–even the pandemic has not stopped them from experiencing new journeys. Soon, the Chous will have another new family member joining their adventures!

Recently, it was rumored that 28-year-old Hannah is pregnant with a third baby. A netizen mentioned overhearing Hannah’s sister talking with her friend that the star is in her first trimester of pregnancy.

When Jay celebrated his 43rd birthday on January 18, he uploaded a photo of himself and Hannah on social media. Hannah was wearing a thick jacket and her belly was strategically hidden in all photos, which made the rumors multiply.

Seeing that many people are already talking about Hannah’s pregnancy, Jay updated his social media yesterday and confirmed that Hannah is indeed pregnant. “My original original plan was to announce the baby after birth, but it can’t be contained. This is the most wonderful gift,” Jay enthused. 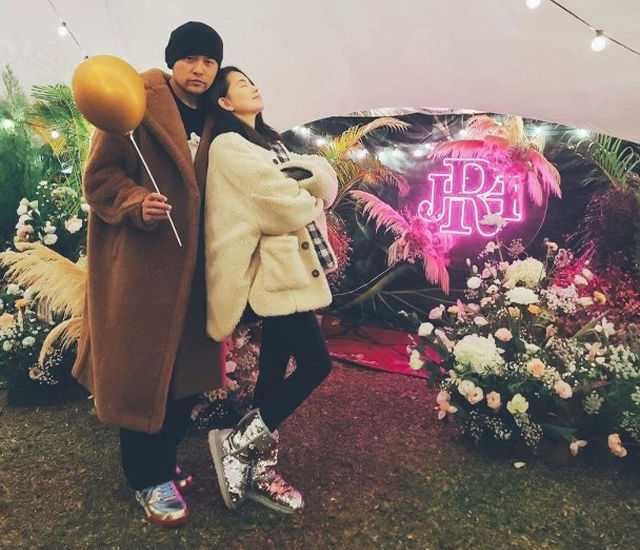 Unlike earlier speculations, Hannah seems further along in her pregnancy. Based on the size of her burgeoning belly, it is estimated that she is approximately seven months along. However, her limbs are still very slim and not swollen.

Also sharing the happy news on her social media, Hannah added the hashtags #N5 coming soon! #teamboy #teamgirl. Many netizens left messages congratulating her, and within 10 minutes her post had over 50,000 likes.

It is no surprise that Jay and Hannah are expanding their family, as both love children. When they first got married, Jay stated that he wanted to have five children as that would make the home very lively!

Hannah’s Struggles as a Mother

After giving birth to Hathaway, Hannah was diagnosed with Polycystic ovary syndrome (PCOS), a condition in which the ovaries produce an abnormal amount of androgens. She was successfully treated for the condition, and subsequently gave birth to Romeo.

Sympathetic to Hannah’s struggles, Jay said they had no plans to add to the family at the moment. Hannah had also stated that she was not thinking of giving birth yet, and would consider it after turning 30 years old.

The sudden news came as a happy surprise to many. Netizens suspect that Hannah’s pregnancy occurred because the couple spent more time with each other during the pandemic.