Hawick Lau to Have Theater Debut with “L’Orage” 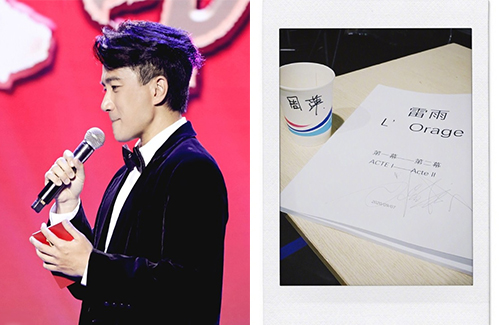 Appearing in Beijing on Monday to attend a press conference, Hong Kong actor Hawick Lau (劉愷威) revealed that he has been busy preparing and rehearsing for his debut stage play L’Orage <雷雨>, also known as “Thunderstorm.”

Based on the novel of the same name written by the late playwright Cao Yu (曹禺), Thunderstorm follows the slow psychological and physical downfall of the westernized Zhou family as they fall victim to incest and oppression. The play has been adapted to many films, most famously the 1957 Hong Kong film Lei Yu, which starred a young Bruce Lee (李小龍).

“I’m letting go of all the accomplishments I’ve made,” said Hawick, explaining that he has put himself back in the position of a new coming actor. L’Orage is the first stage play of his career. “I am a blank page right now. I’ll do my best.” Hawick will be playing the role of the eldest son.