Hera insists she is “just friends” with Ian Chan and Det Dik.

Hera Says Focus is on Career for Now

Spotted driving Ian’s car, Hera explained that Ian had sold the car to her and that the ownership transfer would be complete the following week.

The actress was then seen in Kowloon with her ex-boyfriend Det Dik purchasing household items. Though the two did not hold hands, they deliberately kept a low profile and avoided being recognized. Sharing that she remained good friends with Det Dik, Hera explained that she was making purchases for a mutual friend gathering that day with the latter, and added that she would prioritize her career for now.

In a curious move, Det Dik later deleted all photo and video entries from his social media. 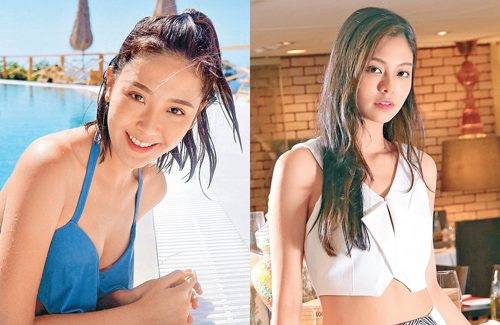 On the other hand, Ian is also said to be linked with two of his co-stars, one being actress Zoe Yu, his onscreen partner in We Are The Littles <男排女將>. Zoe firmly denied this, stating that she hardly talked to Ian and did not even have his telephone contact, “We’re only an onscreen couple. I’m not sure whether the viewers too engrossed or there is some misunderstanding, but we’re not that close!” Ian’s manager refused to respond to the matter.

Chinese-Costa Rican model Amy Lo was also said to be linked with Ian after he gave away his first onscreen kiss to her. Amy also appeared in the well-received recent drama We Are The Littles. The two were said to be flirting on set, with Amy taking the initiative by showing skin and even feeding him food. It was even said that Amy got the chance to guest-star in We Are The Littles due to Ian, though producer Chan Suk Yin (陳淑賢) denied this, saying Amy was picked for her outstanding looks during auditions.

Amy is most known for her marriage rumors with Hong Kong swimmer and actor Kevin Kam (朱鑑然), though the latter’s manager later revealed the two had broken up.

Ian, who has been labeled “goddess-killer,” had previously been linked with artistes Hailey Chan (陳俞希) and Chloe So (蘇皓兒) while taking part in the talent show Good Night Show King Maker
<全民造星>.