Taking the lead in upcoming TVB drama Paranormal Shop <異搜店>, Hera Chan (陳曉華) was suspected of making a move on her co-star Matthew Ho (何廣沛) despite knowing about his involvement with Rebecca Zhu (朱晨麗). While Rebecca was away working in China, Hera and Matthew were seen spending increasing time together during filming breaks. 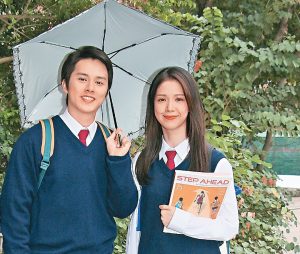 Having previously worked on Zombie <食腦喪B> together, Hera and Matthew have evidently become very comfortable with each other. Playing a couple in Paranormal Shop, Matthew succeeded in making Hera less nervous when filming her first onscreen kiss.

Though she has starred in On-Lie Game <迷網>, Hera’s acting skills are still very rigid and constantly causes outtakes. Since Hera’s mistakes caused her colleagues to work overtime, she is shunned by many of the cast and crew. The only person who warmed up to her and offered guidance was Matthew. Latching onto the actor, Hera has been inseparable from Matthew on set. He was even seen accompanying her to a nearby public washroom during filming one day.

Matthew and Rebecca’s relationship has been an open secret for three years, and he has even been spotted spending the night at her home before. Sources close to the couple say that Matthew takes very good care of Rebecca and they are in a very stable relationship although they do not talk about it publicly.

Despite this, Hera continued to get close to Matthew and consistently asked him out to dinner when Rebecca was working in China. Initially agreeing to have dinner with Hera, Matthew stopped going out together once Rebecca returned from China, and opted to spend more time with his rumored girlfriend instead.

When Rebecca posted a sexy photo of herself on her Instagram, which was immediately liked by Matthew within seconds, Hera also began posting photos of herself in tight clothes and showing off her bare waist. Just last week, Hera posted a self-encouraging post, stating, “I’ll cry, but it doesn’t mean I’m weak. When I’m done crying, I’ll continue moving forward.” Matthew liked her post and responded in a friendly manner, praising her positive and upbeat attitude.