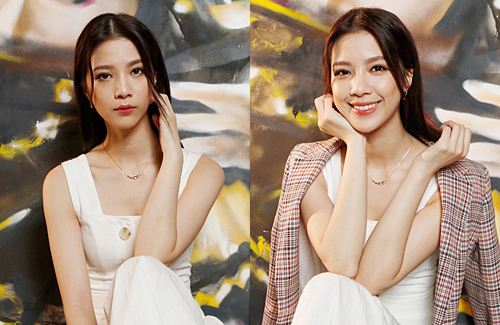 In the industry for a year, Miss Hong Kong 2018 and Miss Chinese International 2019 winner, Hera Chan’s (陳曉華) exposure is growing. Filming her first TVB drama Cyber Fraud <網絡騙案>, Hera admitted she had a lot of learn as an actress.

The 24-year-old actress used to be really shy, so entering the pageant took a lot of courage for her. Though she studied to be a nurse, she realized she wanted to try new things to broaden her vision. She said, “I used to love nursing, and during my placements I was really passionate about it. After graduating, I met a lot of new friends who changed my perspective. I wanted to change my introverted personality so I participated in the pageant to learn new skills and accept new challenges.”

Her parents noticed Hera’s change and how much happier she was when she began to open up to people. She decided she must work hard if she wants to succeed in the industry.

In Cyber Fraud, Hera decided to do her own stunts and ended up injuring her neck. However, it was reciting the dialogue that gave her the most trouble. Hera said, “I did a lot of preparation prior, but I realized how unprepared I was when I entered the field. When I recited something wrong, it makes me nervous, which leads to more mistakes. Luckily, I have a lot of seniors helping me throughout the process.”

Thanking her co-star Mat Yeung (楊明) for his constant encouragement, Hera said, “While waiting on set, I asked him how I could bring out the character. He said it takes a lot of preparation. He also mentioned that I should focus on acting naturally onscreen, and  I should read the script carefully to bring out the emotions.”

Previously, Hera had wanted to get married at the age of 27 or 28. After entering the industry, she realized she still has a lot to learn. She wants to focus on her career first, and then she will think about dating.