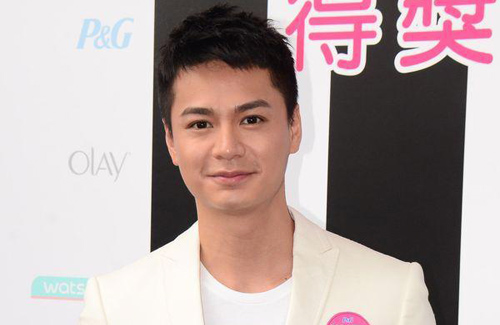 Known for his fit physique and handsome appearance, Him Law (羅仲謙) attended a function today for a beauty brand and shared many of his skincare secrets. Since his mother was a beautician, Him was often the guinea pig for his mother’s beauty experiments when he was younger.

When asked whether he will share beauty tips with his girlfriend Tavia Yeung (楊怡), he smiled and said, “I won’t, because all my coworkers in this industry have a lot of information and folk prescriptions. I should actually ask her for advice!” Him further stated that he does not mind buying female products for his girlfriend.

Although Him has been busy filming movie The Monkey King 2 <西遊記之三打白骨精> in China, he revealed that the filming progress is near completion. The filming crew will also reportedly travel to New Zealand for additional scenery shots. “I’ve heard about it. The purpose of going there would be to film their forest scenery, which is a very beautiful location.”

In May, Him will be returning to TVB to film a new drama.

Him’s costar in Young Charioteers <衝線>, Jinny Ng (吳若希), shared a photo on social media where a man was intimately kissing her on the cheek. She left a cryptic message on her social media, prompting speculation that she wants to publicly acknowledge the relationship. While the man appears to be Alan Wan (溫家偉), many wondered if Jinny’s gesture was simply to boost viewership for the drama.

Him expressed that he was not aware of the situation and was not sure who the person in the photo is. “If it were true, than I am happy for her! I’ll be nosy [and ask her] later. I want to know who he is.” When asked whether this was just a promotional tactic, Him said, “Whether it is for publicity or if it’s true, both circumstances are good things as long as everyone is happy.”