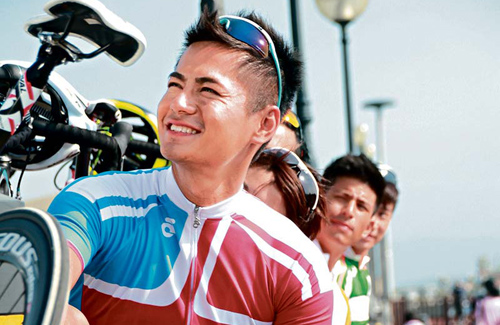 “Most of the cast are young actors. We have Sisley Choi, fresh from the Miss Hong Kong Pageant, a popular singer [Jinny Ng], Sammy Sum, Alan Wan (溫家偉), Adrian Chau (周志文)… we knew and expected that this drama would bring in a lot of gossip.”

The thought of knowing that they would be targeted by tabloids seemed frightening at first, but the cast quickly got over the fear. “We shouldn’t dwell on them. If all we do is worry, we would not be able to perfectly demonstrate our chemistry on screen. Personally, I’m treating all the rumors as promotion for the series. It’s good to know that people are already following the drama before it even aired.”

At 30 years old, Him joked that he feels very fortunate to still star in a youth drama. Him is no longer bothered by love rumors as he understands that such gossip comes with being an entertainer. “I can’t let such negative news affect my work attitude and performance. The reporters and the actors all have our own jobs to do. We need to find and master our balance. That’s how the game works.”

Stepping into his eleventh year in the industry, Him often ponders about the future. “I’ve learned to appreciate and cherish everything I have in life. I’m very satisfied with myself right now, whether it’s my career, family, or relationship. I’m very happy.”

Asked if he and girlfriend Tavia Yeung (楊怡) have ever thought about marriage, he said, “At my age right now, it’s finally time to think about my career, my marriage, my children, and my retirement. It’s time to prepare for my future.”