The road to success has been long and tiresome, but as it turns out, the wait was worth it.

Hong Kong-born American actress JuJu Chan (陳鈺芸), a recurring star in the Netflix series Wu Assassins, is gaining international attention for her role as the female bodyguard Zan. In IMDb’s Most Popular Celebs list, a weekly list as determined by IMDb users, JuJu Chan rose 905 places to 84th place in the 100 list, ranking higher than even Captain Marvel star Brie Larson this week. 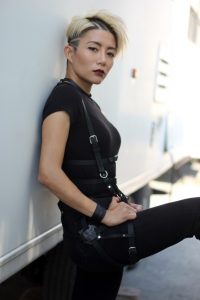 IMDb users have been using the platform to praise JuJu’s performance on the show, specifically the 30 year old’s action prowess. JuJu did all of her scenes without a stunt double.

According to producer John Wirth, the character of Zan was originally written to be a male. However, he was so impressed with JuJu’s audition that he changed the role to suit her.

Doing action scenes for television are difficult, as there is usually limited time to train. JuJu said, “We are usually given about two hours to train and practice an action scene. The action choreography team and I would then demo the scene for the director.”

Wu Assassins’ action choreography Dan Rizzuto praised JoJo for being a professional in the business, saying that actor usually do not participate in the demo reels. “It’s my first time seeing this in 20 years,” he said. “JuJu is very dedicated to her craft.”

JuJu was born in Hong Kong but grew up in San Francisco, California. She attended the University of San Francisco as well as the Tisch School of the Arts. Prior to entering Hollywood, she participated in the 2010 Miss Hong Kong Pageant.

Wu Assassins stars Indonesian action star Iko Uwais as Kai Jin, who learns that he is the last of the supernatural Wu Assassins, and is destined to kill the five Wu Warlords. The series is set in Chinatown, San Francisco, and also stars Byron Mann (文峰) and Li Jun Li.