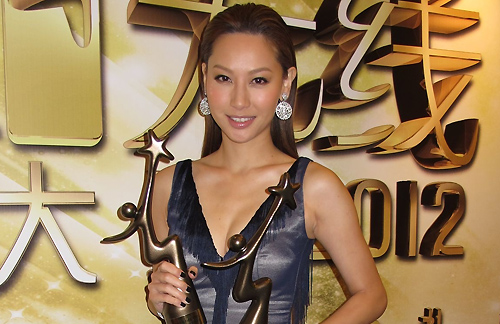 Kate Tsui (徐子珊) began her acting career after winning the title of Miss Hong Kong in 2004. The road to success has not been easy for Kate, as many viewers criticized her early acting skills.  Despite the negative news and her involvement in quite a few romantic rumors during her career, Kate has been working very hard to gain respect and acceptance from the viewers. This year has been a transformative year for Kate’s career, will she be able to add TV Queen to her resume?

In the beginning of Kate’s career, she had to adopt a crew cut hairstyle in order to portray a tomboyish police rookie in the police drama, On the First Beat <學警出更>. As Kate had the reputation of being a beauty queen, the viewers did not accept her tough tomboy image. Afterwards, they did not like her look and continuously criticized her performances in many of her dramas. Even though the producers praised Kate for her great debut in her first drama, the viewers continuously criticized her acting throughout her career. Kate was confused and had difficultly finding the right balance between being a professional actress and being a popular actress well-liked by viewers.

A few producers advised Kate that the viewers will not suddenly change their negative views, so she had to accept it and continue to find a way to earn their respect.  With her passion for acting, Kate has been focusing on improving herself in all her roles.

When Kate was first cast to play a Drug Queen in Highs and Lows <雷霆掃毒>, she was not certain if the role was suitable for her. Aware of the viewer’s negative opinions, Kate was worried that they will not accept this tragic character who is a gang rape victim turned drug queen.

Once she accepted the role, Kate prepared herself emotionally for the role, by watching movies related to drug dealers and going out to observe real addicts at the rehabilitation center. Kate was feeling down during filming because she was so immersed in her character. In order to appear like a drug addict, her makeup was very gloomy. Kate did not even want to look at herself in the mirror. In addition, she was also worried that the viewers will not accept her unattractive image with snot and tears running down her face.

Upon airing, Highs and Lows was very well received by the viewers. They were touched by Kate’s sincere performance. Her tragic character generated positive media and viewer praise towards Kate. Her fan base has increased tremendously, and she is now the hot favorite to win this year’s Best Actress award.

This One is for the Fans

During the past award ceremonies, Kate did not feel excited attending since she felt as if she was only an adornment, only there to look pretty without any expectations of winning any awards. However, this year she is feeling pressure to win the Best Actress award in order to not disappoint her manager, the crew, the media and her fans. They have been working very hard to promote her to become the leading actress and have high hopes for her to bring home the TV Queen award. Kate said, “I don’t want to disappoint everyone and it will be devastating if I don’t win. With this year’s one person, one vote selection process, many things are unpredictable. With their hard work and dedication, if I still lose at the end, I will be very sad.”