Joe Ma’s (馬德鐘) son Xiang Ma (馬在驤) is interested in the entertainment industry and Joe will be there to support him along the way.

At a watch brand event yesterday, also attended by his Smooth Talker <以和為貴> costar Kate Tsui (徐子珊), Joe talked about the rumor that his 20-year-old son, Xiang Ma, has expressed interest in becoming an actor. The rumors claimed that Xiang had signed with Shaw Brothers, but Joe clarified that his son is still in Australia for school. “I was the one who signed with Shaw Brothers. My son still has three years left of school.”

Joe did confirm that his son has shown interest in acting, saying, “Many agencies have reached out to sign my son, but I want him to focus on school first,” said Joe. “I don’t know how interested he is with the entertainment industry, but I do want him to do what he wants. It’s up to him.”

Joe has also shared that he was approached for a father-son project, which he has expressed interest in. “This would be a good learning opportunity for my son. I don’t know when that project will start, as I currently have some films to complete first.”

Xiang has recently completed coursework and a license to become a surf lifeguard in Australia. Joe is proud of his son’s accomplishments and urged his son. “I was a lifeguard when I was younger. A surf lifeguard is much more challenging.”

With netizens joking that his son Xiang has already surpassed him, Joe joked, “Different stages in life attract different tastes.” As for his son’s dating life, Joe said he would not intervene. “At his age dating is normal. I don’t interfere.”

Kate joked that she would love for an opportunity to work with his son, in which Joe said, “I didn’t know you like little fresh meat.” 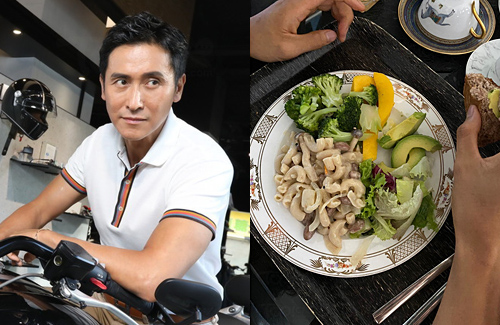