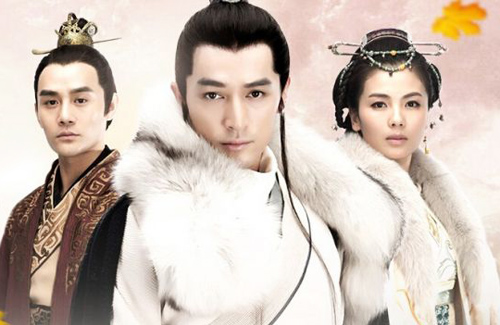 Mainland period drama Nirvana in Fire <瑯琊榜>, which stars Hu Ge (胡歌) and Tamia Liu (劉濤), will begin airing on Dragon TV on September 19. Based on an Internet novel, Nirvana in Fire is the revenge story of a young but high-ranking military officer whose father’s army was framed and destroyed by a political rival.

Writer Hai Yan (海宴), who wrote the original novel and drama screenplay for Nirvana in Fire, made a rare public appearance at a recent video preview event in Chengdu. She shared that adapting the story took six months, during which she repeatedly made modifications in order to perfect the drama’s screenplay.

Although there are some details that cannot match up perfectly with the original work, Hai Yan is positive that the drama will capture the essence of the novel. “I removed some secondary plotlines, while fleshing out the main plotline,” she revealed. “What everyone cares most about, the ending of [main character] Mei Changsu, will still be kept. According to my own standards, at least 80 percent of the original story has been retained.”

Hai Yan also addressed concerns that Nirvana in Fire would focus too much on the romantic storyline. At another video preview event in Wuhan, Dragon TV unveiled a special clip featuring romantic scenes between Hu Ge and Tamia Liu. Although their chemistry was impressive, some fans expressed worries that the revenge element of the story would be overlooked.

“The novel originally had a love story in it, so of course the drama version will too,” said Hai Yan, who widely praised Hu Ge and Tamia’s acting. “This extremely attractive love theme cannot be avoided and does not need to be avoided…. I hope that audiences will approve of and relate to this type of love, which is hidden in one’s heart.”

Nirvana in Fire will broadcast two episodes every evening at 7:30. The series will also be available for online streaming on Youku and Tudou.