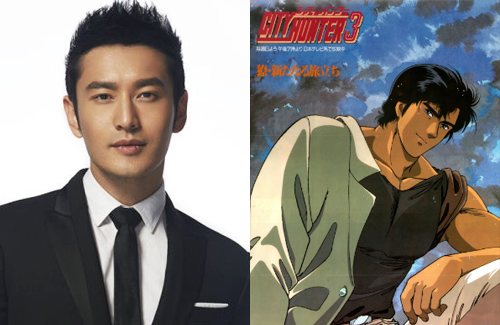 Huang Xiaoming (黃曉明) announced that he has obtained the copyright to produce new Chinese film project, City Hunter <城市獵人>. A long-time fan of the original Japanese manga, Xiaoming will star as as the main lead.

Xiaoming said, “I’m a very loyal fan [of the manga]. I read them when I was eight years old. When I was little, I would go to a bookstore after school where everyone would sit around and pay five cents to a dime to read a manga novel. City Hunter was an ongoing series and I spent a long time reading it. I spent all my allowance on the manga. Afterwards, I saved up enough and bought the entire set of City Hunter. I still have them at home now.”

Working alongside Xiaoming, who will be acting as the movie’s producer, is Director Stanley Tong (唐季禮). Thrilled to be taking part in this new production, Stanley recalls having watched Jackie Chan‘s (成龍) version of City Hunter when he was younger. Visiting Jackie during the filming, Stanley revealed that he secretly hoped that he would be able to direct something of that scale.

Confident that this production will be a hit, Stanley laughed and said his only worry would be Xiaoming’s natural good-boy image. In the pair’s previous television collaboration in The Patriot Yue Fei <精忠岳飛>, Xiaoming portrayed a patriotic family man. Although Stanley praised Xiaoming’s ability to portray Yue Fei, the director said Xiaoming will need to break away from his normal image to play lecherous detective, Ryo Saeba, in City Hunter.

As of now, Xiaoming is the only confirmed cast member. Stanley said they will try their best to cast the perfect female and will make sure she is also fan’s preferred choice.