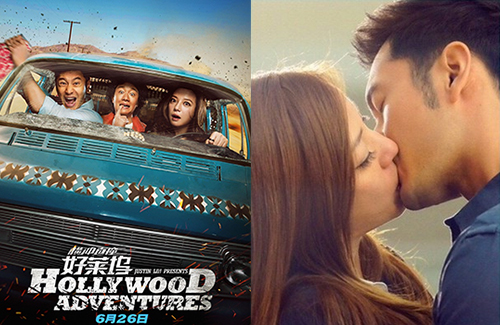 Actors Vicki Zhao (赵薇) and Huang Xiaoming (黄晓明) are not only old classmates, they are also close friends.Though the two Chinese superstars have been close since their college days at the Beijing Film Academy, they never had the opportunity to collaborate in a film or drama.

However, producer Justin Lin (林詣彬) finally brought the two best friends together to film his upcoming movie Hollywood Adventures <横冲直撞好莱坞>, a comedy film about three wannabe celebrities who want to make it into Hollywood. When speaking about how it felt like to be paired up with Vicki for the first time in his onscreen career, Xiaoming praised Vicki to be an actress with natural talent.

In the film, Xiaoming and Vicki have a hate-love relationship. They eventually become a couple, and share a passionate kiss. Xiaoming said he once attempted to kiss Vicki while the two collaborated in a small acting project for college, but he got too embarrassed and backed out. Although he didn’t back out this time, his cheeks and ears turned noticeably red while kissing Vicki.

Vicki laughed at Xiaoming’s awkwardness. The seasoned actress said that because she had to kiss Xiaoming many times, she eventually got used to it.

In related news Vicki, who won Best Actress at the Hong Kong Film Awards, recently established a charity fund to help leukemic children between the ages of 3 and 14. The charity has already sponsored many bone marrow transplants for these children, and a majority of the patients are recuperating. Earlier, Vicki and a game company attended a press conference, where both of them donated 1 million RMB to the charity.