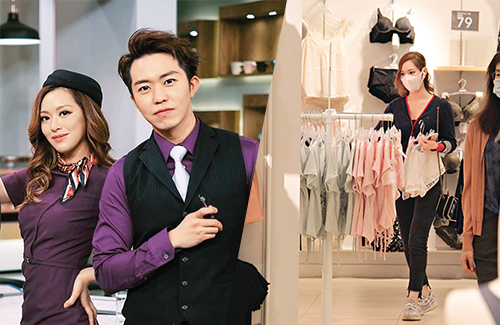 Last December, 25-year-old Crystal Fung (馮盈盈) announced her split from her non-celebrity boyfriend of four years, but it wasn’t long before new dating rumors started sprouting between her and Young and Restless <後生仔傾吓偈> co-host, 28-year-old Leonard Cheng (鄭衍峰). Many viewers found their dynamic on the show interesting, noting that they have gotten much closer over time. In a speed dating episode, Leonard and Crystal did a lot of fan service for the camera, and Leonard even prepared a “love letter” for Crystal, professing his “love” to her.

According to sources, Leonard and Crystal started getting close last November, when the Young and Restless cast flew to Vancouver for a special overseas episode. As Leonard is from Vancouver, he showed the cast around, and was specifically caring towards Crystal.

A day after Crystal announced her split from her boyfriend, she was photographed grocery shopping with Leonard. Earlier this month, Leonard was seen driving Crystal’s new car around the city.

And last week, Crystal was photographed by paparazzi shopping for lingerie. Perhaps the rumored couple is also getting ready to move in together?