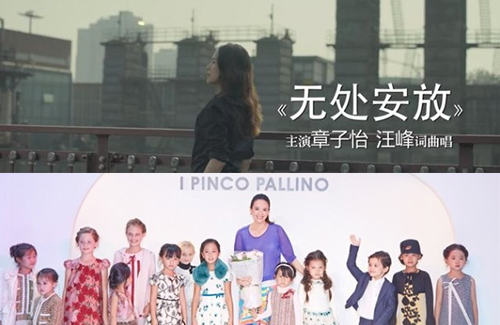 To get in character, Zhang Ziyi (章子怡) had to put on her fake “baby bump” to promote the sci-fi comedy Oh My God <从天儿降> at a press conference for the film earlier this month. But the prosthetic belly was probably unnecessary after all, as the actress is currently rumored to be six months pregnant.

Ziyi, who got engaged to Chinese rock singer Wang Feng (汪峰) in February, has been seen out and about wearing looser clothes. Rumored to be at least six months pregnant, it was reported by insidered that Ziyi had rejected many job offers, choosing to accept simpler jobs such as attending public events. In her latest public appearance, on August 20 in Beijing, Ziyi had on a large sweater, a long skirt, and wore flats instead of heels.

The pregnancy rumors gained traction when Wang Feng released his latest music video “No Where to Let Go” <无处安放>, which starred Ziyi. In the video, Ziyi wore loose clothes that conveniently hid the shape of her stomach. In one scene, Ziyi’s side faced the camera, and her belly slightly protruded.

A source close to the couple said Wang Feng initially wanted to announce Ziyi’s pregnancy at his Shanghai concert in July, but due to severe weather conditions, the concert was delayed to September.

Ziyi and Wang Feng have been keeping quiet, neither confirming nor denying the rumors.