International actress Zhang Ziyi’s (章子怡) first television series Monarch Industry <上陽賦> is nearly halfway through airing, but it’s not receiving a lot of love given the negative reviews. Usually, online viewing platforms will allow users to pay an additional fee of about 3 Chinese yuan to watch ahead toward the end of a hot drama’s broadcast. However, this feature is already available midway through airing for Monarch Industry, indicating that things are not looking good. Viewers can now pre-order the drama’s next 10 episodes every week for a considerably low rate of CNY 1. 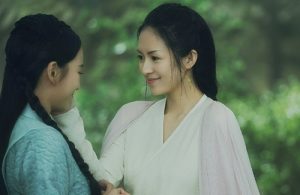 Not only has the series been criticized for being too “girly,” but Ziyi’s acting has also been questioned. Netizens are also puzzled about the casting because most of the stars’ ages differ greatly from their actual characters, besides Hewei Yu’s (于和偉) role as Ziyi’s father. On top of that, viewers bashed the drama for having too many loopholes and confusing scenes.

Netizens commented that they would not be paying for this drama and expressed, “The plot is so dumb that it is ruining such a good production team.”

Some have also mentioned that they would be giving up on the show. Others have said the viewing platform is slowing down the broadcasting time to secure an audience.