Viewers are unconvinced about her portrayal of a 15-year-old in new drama “Monarch Industry”.

Monarch Industry <上陽賦>, the first costume drama which Zhang Ziyi (章子怡) filmed three years ago, finally premiered on January 9. The supporting cast consisting of Zhou Yiwei (周一圍), Yu Hewei (于和偉), Kara Hui (惠英紅) and other veterans undoubtedly pushed up anticipation for the drama. In less than a day, Monarch Industry climbed in search rankings with the most discussed topic being Zhang Ziyi’s “youthfulness”. 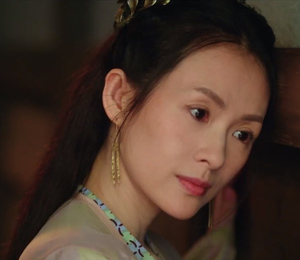 The script required Ziyi to portray her character Wang Xuan’s (王儇) growth from her adolescent years, starting from the appearance of her 15-year-old self in the first episode. Some viewers criticized Ziyi for her portrayal of a pubescent teenager at her age, saying it was visually incongruent, as she could not pass off convincingly as a young girl despite her best attempts.

However, there are also viewers who felt that the actress did a good job showcasing the naivete of a young girl, and that there was no need to harp on the superficial aspect of “youthfulness,” since the character’s inner turmoil and body language can also help the portrayal.

Responding to the feedback on social media, Ziyi wrote, “The production team and platform of Monarch Industry should stop exploiting me to market ‘youthfulness’”! Elaborating that she was 38 when she filmed the series and will soon turn 42 next month, Ziyi is well-aware she is far from the age of a “foolish young girl.” In fact, she knew when she received the script that she would have to portray her character’s growth arc and development, and that viewers need an unclouded judgment to understand and get to know Wang Xuan. While it is part of her scope to portray her character, “other forms of marketing” should be avoided.

Netizens responded negatively to Ziyi’s defense, leaving comments such as, “Dare to take on the role, but don’t dare to be discussed” and “speechless–isn’t being an actor about getting viewers’ feedback; how is it that you take it as being exploited?”

Some viewers also pointed out the irony of Ziyi seemingly hyping up the drama surrounding the issue for publicity, as she was found to be a shareholder in Big Eye Group, one of the firms that invested in the drama.

Actresses Who Have Been Similarly Critiqued