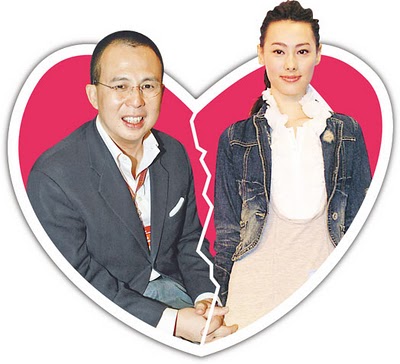 Isabella Leong Lok Chi and billionaire, Richard Li met in 2007 through The Mummy 3’s co-star, Michelle Yeoh. Since then, Isabella was branded as “Cinderella” in dating the wealthy Richard. In April 2009, Isabella gave birth to their son, Ethan Lee. In 2010, Isabella gave birth to a pair of twin boys. When Isabella announced her split from Richard Li on February 26th, many negative rumors speculated the cause of their break-up.

An inside source stated, “Bella and Richard were truly in love. When Ethan was born, Richard loved them dearly. Richard even renovated his mansion in Hong Kong to accommodate Bella and Ethan moving in with him. However, Isabella felt bored and often asked Richard to spend more time with her. She even flew to Hong Kong by herself to find her friends. Richard accommodated her and went home directly after work to spend more time together. Since living together in Hong Kong attracted attention from the paparazzi, Richard asked Bella to return to Canada .

“After giving birth to twin boys last year, Bella said she wanted to resume her acting career. She even said that she can earn money to raise her children. Perhaps Bella wanted a man to love and pay more attention to her. However, Richard was not very happy over this.”  According to the inside source, Bella and Richard had numerous arguments, finally resulting in their decision to end to the relationship.

Refusing to Be Branded a Gold Digger

Although the break-up has become a fact, Isabella was unhappy with rumors that branded her as a gold digger. An inside source noted, “Bella was very unhappy and felt the rumors were unfair. She did not want to be called a gold digger and refused to accept Richard’s money. She only accepted properties in New York and Hong Kong , to facilitate easier care over her sons. The properties have a combined value of $200 million (HKD). Richard agreed to take care of Bella and her sons for the rest of his life; this was what he meant.”

According to the inside source, Richard bought Isabella a $85 million (HKD) luxury house at Bel-Air Residence in Hong Kong . Stopping by the residence complex, the reporter noted that the building had security guards on duty 24-hours daily. Outside, security cameras recorded the street scene as well.

The latest news claimed that Isabella has agreed to star in Tsui Hark’s film, Detective Dee Prequel <狄仁傑前傳>. An inside source noted, “Bella is concerned about the time required to film the movie since she needs to take care of her sons. She demanded that she have private time outside of work, especially on weekends. Since the filming will occur in China , Bella may relocate her sons to Hong Kong .”

When reporters contacted Tsui Hark to confirm the news, his secretary said that she did not receive the final notice yet. However, since Mr. Tsui’s secretary did not strongly deny the news, perhaps there may be some truth behind it.

Jayne: Shortly after she gave birth to their first son, Richard Li and Isabella Leong were living separately. With young children, it’s especially difficult for the couple to be leading separate lives. Perhaps the inside source did provide the real reason as to why the pair split up. With Isabella still young, I can understand her desire to not become a stay-at-home mother and want to do more things in life outside of children.

I am just surprised with the relationship at stake, couldn’t the couple try harder? It’s only been a year since the twin boys were born. Everything needs an adjustment period. If the couple still love each other, shouldn’t they give each other another chance?