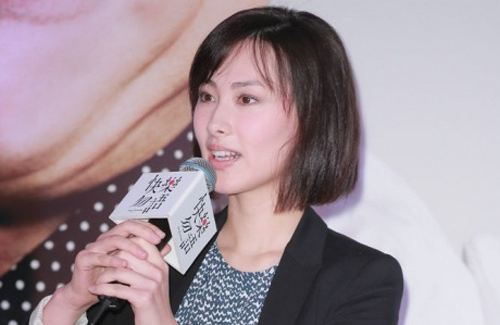 Isabella Leong (梁洛施) is returning to the Hong Kong entertainment industry with a starring role in stage play Sign of Happiness <快樂勿語>.

Since breaking her contract with EEG in 2008 to pursue her romance with ex-flame, billionaire Richard Li (李澤楷), Isabella has remained mostly out of the limelight. Currently living in Canada with her three sons, she had earlier expressed her desire to continue making films in Hong Kong and has been busy paving her way back into the entertainment industry. In September 2013, Isabella took the first step towards her complete return, signing on to star in Taiwanese director Sylvia Chang’s (張艾嘉) film Nian Nian <念念>.

Isabella is now turning her focus onto her Hong Kong comeback. The twenty-five-year-old will star alongside mentor, theater actor Jim Chim (詹瑞文), in his original play Sign of Happiness. Isabella will play a deaf and mute girl while Jim will portray a speech therapist who hopes to inject laughter into her life. To prepare for this challenging role, Isabella has been taking lessons in body expressions and has been busy with rehearsals for the past two weeks. The performance is scheduled to take place over three nights at the Hong Kong Culture Centre starting May 30.

With no real updates regarding Isabella’s love life since her break up with Richard in 2011, the local media of course pressed the issue at the play’s press conference. Although she was rumored with several men over the past few years, Isabella clarified that she has actually been single for quite some time. “I used to make love my top priority, but that has changed after having three sons. I want to focus on my career, and will let love come naturally. I will not be as impulsive as before!”

Despite her intention to fully return to work in Hong Kong, Isabella plans to continue living in Canada for the sake of her children. “I like to raise my children over there. It is healthier. I also prefer a low-key lifestyle, but of course I will come back to Hong Kong often for work.” She added that her career is currently one of her top priorities, and shared that she will likely appear in films again in the near future.