Despite scarcely having enough time for rest with simultaneous filming schedules, Jack relishes each acting opportunity.

Airing to positive response, Barrack O Karma <金宵大廈> has been impressing viewers with stories led by different actors for each chapter, including many “green leaf” actors who have shone in their performances. One of its recent story arcs is led by Billy Luk (陸永) and Zoie Tam (譚凱琪) who play “Iron Man” and “Carmen”. Viewers were also glad to spot the familiar face of Jack Hui (許家傑), who guest-stars as a rich man’s son. They were impressed by a scene of him courting Carmen, where he showed off his biceps by carrying her in his arms through a crowded street.

In fact, Jack has been busy with three distinctly different roles in three dramas that are currently on air – the muscular “Sung Shui Fai” in the long-running Come Home Love: Lo and Behold <愛．回家之開心速遞>, a mafia boss’s right-hand man in My Life as Loan Shark <街坊財爺>, and a rich man’s son in Barrack O Karma. When interviewed, the former Mr. Hong Kong said, “I’ve never thought that all three dramas would air together, especially since I was only guest-starring in Barrack, but I’m so glad that this time I’m a rich man’s son who took the initiative to court Zoie in the show. Finally Sung Shui Fai has become rich; too bad I can’t ‘bring’ the wealth over to marry Dai Siu Jeh in Come Home Love!” 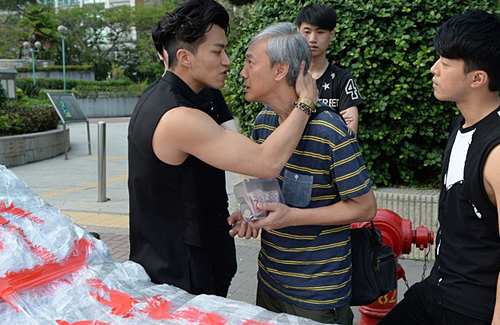 In My Life as Loan Shark, Jack plays “Brother Zong”, the right-hand man of “gold-wearing boss”, played by veteran actor Kent Cheng (鄭則仕). Often taking hits for the mafia boss his character has a fearsome knife scar on his face. Besides his brotherly bond with James Ng (吳業坤), he also has a touching mother-son relationship with veteran actress Helen Ma (馬海倫), whom Jack shared gave him many pointers on acting. “Many Best Actor winners have worked with her previously, it’s my good fortune this time round!”

With memorable leading performances in recent years, such as his turn as “Double” in Fist Flight <兄弟>, Jack’s acting has been recognized by viewers. The 36-year-old actor said, “I’m elated. Many producers have seen my acting and given me chances, and I’ve good roles in quite a few dramas. I really appreciate each and every chance, although sometimes it’s pretty tough to star in two dramas at once. As the schedule for Come Home Love is tight, I’d scarcely have time for sleep if I take on another [drama]. These are all chances for me to take on different characters, so I work really hard on the scripts and hope to perform to my best.”

Jack would also attend classes on singing, acting, enunciation and other techniques so as to improve himself.