Although Mandy Lam (林淑敏) is older than Jack Hui (許家傑) by seven years, they are a good physical match and popular onscreen couple in Come Home Love: Lo and Behold <愛．回家之開心速遞>. After five years of working together, they have become good friends in real life who would help each other in times of need. Recalling the time he had suffered food poisoning while on set, Jack is grateful for Mandy driving him to the hospital.

Describing her relationship with Jack as being “like close friends and family members,” who trust each other mutually, Mandy said, “We first met during 2012’s No Good Either Way! <衝呀! 瘦薪兵團> where I acted as Madam Ou, and he was the triad character which suited him.” Seeing Jack in the makeup room, Mandy had complimented Jack on his stylish image. After years of collaboration, their initial courteous interactions gradually grew into sincerity and mutual trust.

Far from her snobbish character Dai Siu Jie in Lo and Behold, Mandy impressed Jack with her professionalism. “Before I joined (the cast), Dai Siu Jie was already a very popular character liked by viewers. There was a scene where she got drunk and I had to piggy-back her. I asked if she minded it? She said no, and in an instant she already got ready on my shoulders; the working relationship was good and the scene turned out very well,” shared Jack, who was impressed by Mandy’s conscientious work ethic and sent a follow-up message to thank her after filming. Since it was the first time she has received such a message in her decade-long acting career, Mandy was touched by Jack’s good manners and upbringing, and found him completely different from the roles he was usually typecast in. 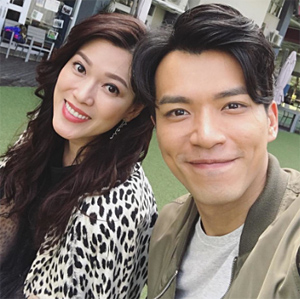 The actor recalled how he suffered from food poisoning once after eating outside while filming on location for an episode of Lo and Behold. “In one hour, I [went to the bathroom] fives times and vomited four times. I really couldn’t continue filming. Luckily, she drove me to the hospital’s emergency center. In the car, I shivered every three minutes. She consoled me while behind the wheel and told me not to worry. I was so enervated and told her to be hush. If she needs my help in the future, I would certainly go all out!”

Hearing this, Mandy interjected and shared that she did not bear for him to suffer while likely enduring a few hours of waiting at a public hospital, so decided to send him to a private hospital instead. “He even told me he would help if I had any trouble in future. I replied ‘no thanks,’ as I don’t want to go to the hospital!”