Come Home Love: Lo and Behold <愛回家之開心速遞> actor, Ricco Ng (吳偉豪), has always been known for his sunshine persona. It came as a surprise when the 22-year-old was embroiled in a controversy when a 12-second uncensored video of him in the shower was leaked online. Avoiding the public for two weeks, Ricco has finally returned to work.

TVB executive, Virginia Lok (樂易玲), responded on his behalf and confirmed that Ricco has filed a police report to investigate the matter further.

After the controversy, many of Come Home Love’s cast stepped up to support Ricco, including Kalok Chow (周嘉洛) and Lau Dan (劉丹). “We’ve all been young before, and can anyone actually say they’ve never done this before? He was just unlucky, and everyone should support him and let the situation fade so that he can return to work,” Lau Dan urged.

After half a month, Ricco has silently returned to work. Come Home Love’s producer confirmed that Ricco has resumed filming the sitcom, and the actor’s mood seems to be fine. The most important thing is for him to maintain a positive attitude.

Actor Aaryn Cheung (張明偉) recently shared some behind the scenes videos on his Instagram stories, and Ricco can be seen adjusting his jacket. The weather was very hot that day reaching a high of 93 degrees Fahrenheit, but Ricco and Aaryn still had to wear dress pants and a blazer to film in the woods. 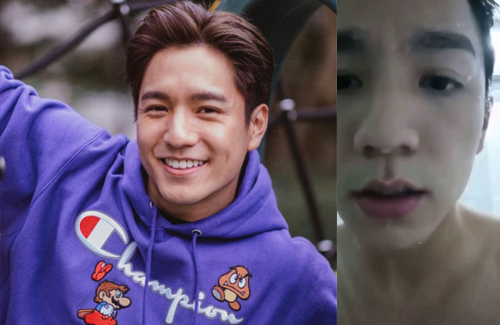