In TVB drama Airport Strikers <機場特警>, Jack Hui (許家傑) makes his appearance as the main antagonist as the leader of a criminal group. Having been in the entertainment industry for 11 years, Jack had a slow start to his career and was given very minor roles. As Jack begins to gain more attention for his acting, he shares the personal challenges he had faced in becoming an artiste.

Growing up, Jack learned that life is not easy. In addition to suffering from severe asthma, Jack was diagnosed with language disorder and had to seek the help of a speech therapist. While Jack’s therapy was successful, Jack confessed that he wasn’t confident with himself.

Jack made his first television debut in Every Move You Make <讀心神探> and was a host for Scoop <東張西望>. Later, Jack took villainous roles in Line Walker <使徒行者> and Tiger Cubs II <飛虎II>. As many of Jack’s roles were not memorable, his friends soon questioned why they never saw him in dramas and they were concerned Jack made enough money to make a living.

With a slow start to his career, Jack felt discouraged, “When an actor has been taking on roles with no dialogues for three or four years, it feels painful and depressing. There was a time when I didn’t even want to work. Then after two or three months without a job, it felt bad and it was frustrating.”

Since Jack did not have a high income from his acting career, he eventually had to borrow money to sustain himself. Although things were tough, Jack did not give up and worked harder to improve himself, “At that time, I started to equip myself [with new skills.] I made exercising into a habit. I learned to sing and act. I looked for opportunities to perform.”

With patience, Jack eventually landed a role in Come Home Love: Lo and Behold <愛·回家之開心速遞> and stole the audience’s hearts with his romance arc with co-star Mandy Lam (林淑敏). His role earned him a nomination for the Most Popular Onscreen Partnership award at the  2018 TVB Anniversary Awards and marked the first time he was invited to the awards ceremony.

Now that Jack has a major role in Airport Strikers, his fans are hopeful that he will make a breakthrough and get to display his acting talents. 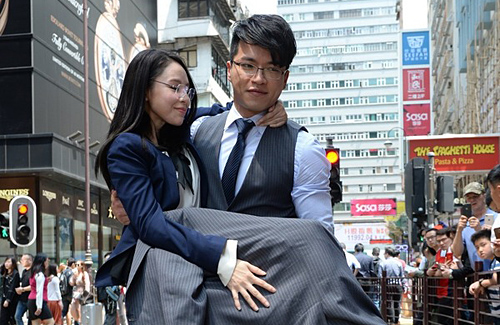 Jack is getting more diverse roles in TVB dramas.