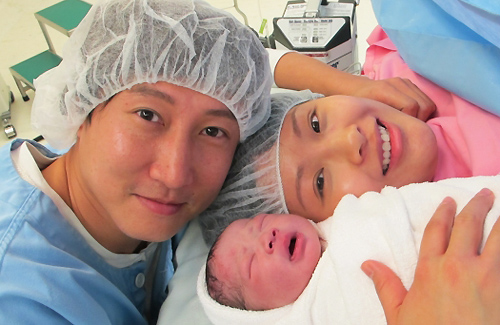 On Monday morning, Sammo, Timmy’s mother, and Janet’s mother accompanied the expectant parents to St. Teresa’s Hospital. Janet dressed warmly to avoid the chills and appeared to be calm despite the big moment ahead. A Cesarean section was performed and when Timmy heard his son’s first shrill cry, he held back his tears. “It sounded like a goose calling in the park. Parents will understand my feelings,” Timmy said. Since Timmy had a slight cough, only Janet kissed TJ in the delivery room. The hospital staff snapped a photo of the happy family together.

Sammo was extremely happy to meet his grandson, laughing that he is willing to give him his life. Sammo had already given everything to Timmy, who will now have to pass it on to his son. Sammo also praised Janet for her strength. The baby’s name will be decided by Sammo and Timmy.

Janet and Timmy knew ahead of time that they were expecting a boy. Earlier sonograms had revealed that the boy’s genitals were very large, in which good friend, Kevin Cheng (鄭嘉穎) joked, “Be careful that he may be a black boy!” Fortunately, the baby was born with creamy white skin.