By addy on September 9, 2019 in Celebrity Weddings, NEWS 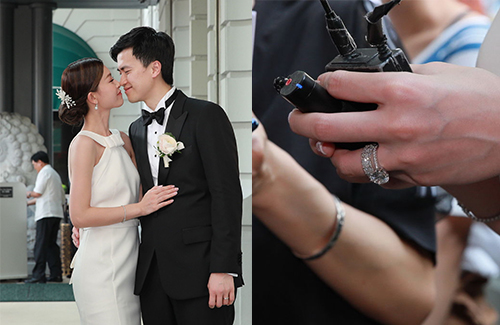 The good news was announced by JM’s friends, who had shared videos and pictures of the marriage registration ceremony on Instagram. In the shared photos, JM wore a traditional southern Chinese-style wedding dress, while Carl wore a red tang suit. 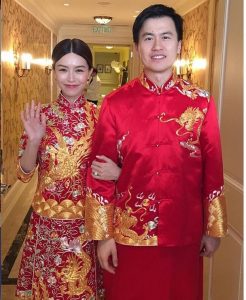 According to various accounts, JM and Carl followed southern traditions at their wedding ceremony—they showed respect to their elders with the morning tea ceremony, in which Carl’s parents gifted the pair with a large golden wedding bracelets.

Before the wedding, JM and her bridesmaids went to Seoul, South Korea for their bachelorette party. 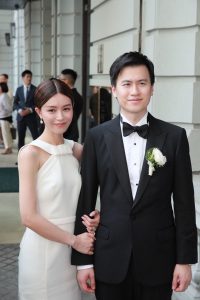 After the traditional Chinese wedding ceremony, JM changed into a simple white dress to greet the press with her husband, shortly before they were to sign their marriage papers.

They happily posed for reporters, and shared their plans to hold another wedding, fairytale style, at a castle in Milan, Italy on October 12.

As for whether or not they will have kids, the couple said they will allow nature to take its course.

Carl’s grandfather Ng Wa-sui (吳華胥) is a respectable figure within the financial industry. Carl’s father Ng Wai-man (吳衛民) owns a duty-free shop. It is estimated that Carl’s family is worth at least HK$100 million.