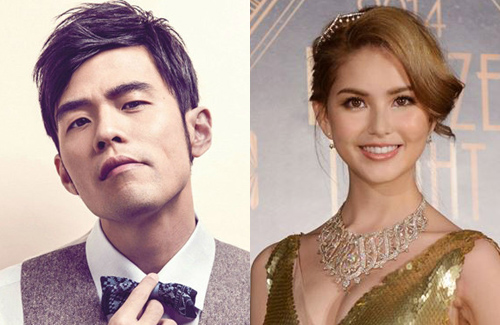 Always having shown his devotion to girlfriend, Hannah Quinlivan (昆凌), Jay Chou (周杰倫) previously implied that wedding bells are around the corner. Recently, Jay and Hannah went on an 11-day trip to Europe to secretly take their wedding photos in preparation for their upcoming ceremony.

Not wanting to delay his marriage any longer, Jay flew his mother, and the styling and photography crew to Europe to complete the wedding photos. Arriving in Europe on October 4, Jay and his entourage stopped in Paris, Munich, Prague, and Vienna.

Jay and Hannah to Get Married Next Year?

In August, Jay had allegedly proposed to Hannah in the Maldives. Jay stated that “there can be no more delays for my wedding”, hinting that the couple already has solid plans for the future. Last month, it is reported that Hannah attended her last function of the year and will be spending the remainder of 2014 preparing for her ceremony.

When asked about the size of her engagement ring from Jay, Hannah bashfully told reporters, “Why don’t you ask him!”

Despite the lack of direct confirmation, Hannah recently uploaded a photo of herself with Jay onto her Instagram account. Whether or not the two were actually taking wedding photos in secret, Hannah and Jay apparently did spend an enjoyable vacation in Europe.