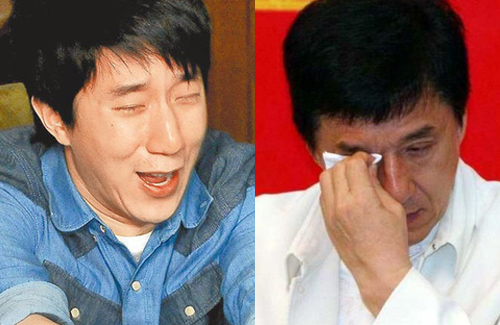 Jaycee Chan (房祖名) was recently sentenced to six months of prison for marijuana use in China. Both Jaycee’s parents, Jackie Chan (成龍) and Joan Lin (林鳳嬌) were absent at the hearing on January 9. Spending a lot of time reflecting while in remand, Jaycee reportedly expressed unhappiness with Jackie for showing insufficient fatherly care, thus leading Jaycee to mix with the wrong crowd and picking up bad habits.

Turns to Drugs for Release

Allegedly, Jaycee wrote three long letters to his mother Joan, expressing his remorse. He explained that he experiment with drugs because of the bad crowd he was mixing with, and started relying on drugs to soothe himself whenever he felt upset.

Jaycee also wrote about the struggles he faced growing up in a famous family, and revealed that the expectations of fame placed a lot of pressure on him. He then expressed his unhappiness with Jackie for not showing him enough concern. Nevertheless, Jaycee was aware that both parents had gone to great lengths to help him because of his arrest, and felt both guilty and grateful. He promised Joan to turnover a new leaf.

However, the veracity of the letters’s content was doubted by Jaycee’s manager, Steven, who said, “That’s impossible! Jaycee would never make such irresponsible statements. Furthermore, every single letter he writes would first have to go through his lawyer’s inspection. I can be sure that these so-called letters are not real.” On the subject of Jaycee’s upcoming press conference and whether he will hold it in Hong Kong or Beijing, Steven said he would respect Jaycee’s decision on the location and time.

Steven addressed the rumor that Jaycee would be making a comeback sometime after the Lunar New Year, and said he was not aware of such plans. Steven also asserted that Jaycee was not in a hurry to make a comeback, “I don’t even know if he wants to return to the entertainment industry full-time.”

Steven added that Jackie would not offer any assistance to Jaycee with his career. He then revealed that the consequences of Jaycee’s marijuana scandal have been fully borne by the management company, which has paid off Jaycee’s costs for breaking engagement contracts. As for whether Jaycee’s scenes would be cut from the Chen Kaige (陳凱歌) film, A Monk In a Floating World < 道士下山>, Steven said this would depend on the director.