Jazz Lam (林子善) is possibly reconsidering his career as an actor! 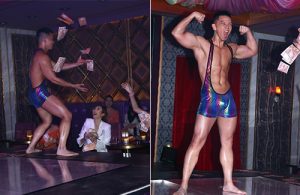 It wasn’t easy to prepare for this role. In addition to strict dieting and training for three months, he also went through several wardrobe malfunctions to get the look right. “During the costume fitting, the brief broke, and the ‘bird’ just came flying out.”

Jazz shared that originally costar Joel Chan (陳山聰) was to do the scene with him, but the producer decided that the story would make more sense if Jazz completed the scene solo.

Grace joked that she should’ve recorded Jazz’s performance and send it to his wife. “Need to tell her that she’s very blessed!” she said with a laugh. Asking if she would ask her husband to perform for her, she said, “He’s rather shy. I don’t think he’s into this kind of stuff.”

A few days ago, co-star Tiffany Lau (劉穎鏇) accidentally injured Jazz’s head with a broom stick while filming an action sequence. Jazz said, “It’s healed now. [Tiffany] is a very hard worker. It was an accident.”