Joel Chan’s Slow Rise to Fame: “I’m Grateful with What I Have” 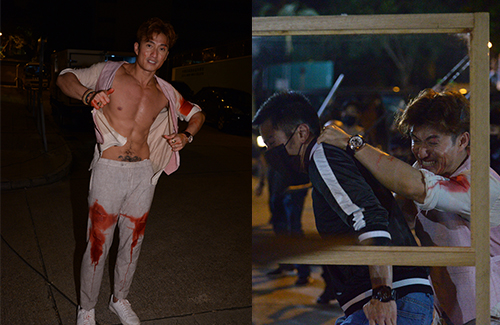 A few nights ago, Joel Chan (陳山聰) shot an action sequence in for his new TVB drama The Killing from 18 Years Ago <十八年後的殺人告白> in Tsz Wan Shan. It was an intense sequence – running away from his killers with only a motorcycle, his enemies finally caught up to him and attacked with knives. There was also a scene where Joel had to smash one of his enemies into a glass panel, which Joel described as “harder than doing a fight sequence.” The actors completed it all in one take.

In the drama, Joel plays Yat Gor (“Brother One”), a triad leader. Co-starring alongside Joel is Shaun Tam (譚俊彥) and Mandy Wong (黃智雯).

The Killing hasn’t been an easy job for Joel. Action scenes aside, Joel also had to do a fight sequence with Shaun, in which both were asked to do the scene shirtless. For the scene, Joel hired four fitness professionals to help him train. “I started to go on a diet a few months ago,” Joel shared. “I had to be really strict with that. Basically, I would eat red rice and chicken every single day. To put on more muscle, you need to eat rice. To ensure that my figure looked good on the day of filming, I literally went on a body-building program—I drank a lot of water the first three days and ate only egg whites and boiled chicken breast. The three days before filming, I couldn’t drink water at all. I could only use it to rinse my mouth, and if I was thirsty, I ate cherry tomatoes and grapes.”

Knowing that he wouldn’t be able to maintain in this shape for a while, Joel said he has already found a photographer to help him to do a photoshoot. He may consider releasing the photos in the form of a photobook if the drama does well.

While many fans are excited to see Joel’s new figure, his girlfriend, Apple, has gotten bored of it. “She’s always wanted me to work out, so that inspired to do it and now I get to show her my progress. She’s satisfied, but now she’s resorted to teasing me as the muscle man. I’m always shirtless around the house, posing randomly, asking her if I looked good, and she’s gotten enough of me. Now she doesn’t even want me to walk around without my shirt.”

Joel and Apple have been together since early 2016, and have plans to get married. “She has been in charge of making my nutritious lunchbox everyday, so of course she gets a 100 percent. If it’s only registering [for marriage], we can do it anytime. However, I’ve been saving money to buy her a diamond ring, and I want to propose to her with it. She did convince me to use that money for something else instead of a ring, but I think a ring, as well as wedding photos, are very important to girls. I must do both for her.”

Last year, Joel won Best Supporting Actor for his performance in The Unholy Alliance <同盟>—his first acting award since debuting in 1995. It was a huge boost to Joel’s popularity, career, and confidence. 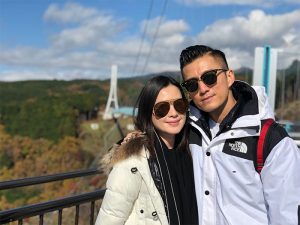 “My mindset has changed after I started doing marathons,” said Joel. “Right now, I come to learn how to enjoy what I have than to chase after vanity. Seven years ago, I really wanted to be a male lead. When I was younger, that was my goal, and I worked hard for it. But after winning Best Supporting Actor last year, I started to see things differently. I’ve come to learn what it means to enjoy what I have, and enjoy acting. Of course, I would not be against any opportunity [to be male lead], but do I want it badly? Not really.”

Joel continued, “I’m very thankful that I have reached this stage in my carer. Compared to many other actors, I am very lucky. At the moment, I only wish to do well in my current jobs. It doesn’t matter if I am lead or second lead. To be honest, there is a lot of pressure to being a male lead, as you have the responsibility of carrying an entire show. I have experienced that before with [the upcoming] Golden Night Building <金宵大廈>. I wonder how the audiences will react when they see me as the male lead? I hope it’s a good one.”

TAGS: Joel Chan, The Final Confession 18 Years Later, The Killing from 18 Years Ago, The Unholy Alliance

3 comments to Joel Chan’s Slow Rise to Fame: “I’m Grateful with What I Have”