Held at TVB City in Tseung Kwan O on Friday October 22, the 2022 TVB Sales Expo showcased 14 upcoming key productions and dropped trailers. Leading the star mantle in drama appearances are Joel Chan (陳山聰) and Natalie Tong (唐詩詠), who have three productions each in the coming year!

For male artistes, Joel has I’ve Got The Power <超能使者>, Phantom Operation and Tactic Team <隱形戰隊> and Brutally Young 2 <十八年後的終極告白2.0> on his hands, though viewers can also expect to see him in Barrack O’Karma 1968 <金宵大廈2>and Chinatown <唐人街>.

Helming two dramas is Katy Kung (龔嘉欣), Malaysia’s favorite TVB Actress winner for this year, as is Roxanne Tong (湯洛雯) who stars in Doppelganger <雙生陌生人> and OPM (Other People’s Money).

Trailers for these spotlight dramas were also revealed, and catching attention was I’ve Got The Power, where Joel will have numerous gun fight scenes.

In Falling in Love with You in Childhood <童時愛上你>, Samantha Ko (高海寧) in a challenging role,  will see be self-touching her chest in one scene and stripping her lingerie in a washroom in another scene right after! 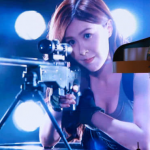 Hoping to refresh viewers’ attention with novel imaging, Kalok and Brian Chu (朱敏瀚) will dress up as women in period drama The Hooligan.

42 Chapters has Katy cast as a pork seller with a moustache; Judy Kwong (鄺潔楹) pulls off an afro hairstyle, and Kaman Kong (江嘉敏) drops her tresses for a short bob.

Actor Shaun Tam (譚俊彥), who caught attention recently for his resemblance to Squid Game actor Lee Jung Jae, was shown buried alive in Brutally Young 2’s trailer, while co-star Katy slipped that the entire series will be a real tearjerker.

Playing the nostalgia cards, Shameless Youth <青春不要臉> will see its cast of young actors as classic characters from the 80s and 90s – among them Dickson Yu (余德丞) as Yang Guo from Return of the Condor Heroes <神雕俠侶>, Kelly Ng (伍樂怡) as Marilyn Monroe while Karl Ting (丁子朗) pays tribute to legend Bruce Lee (李小龍). Tiffany also makes an appearance in a one-piece swimsuit during a pageant in the show.