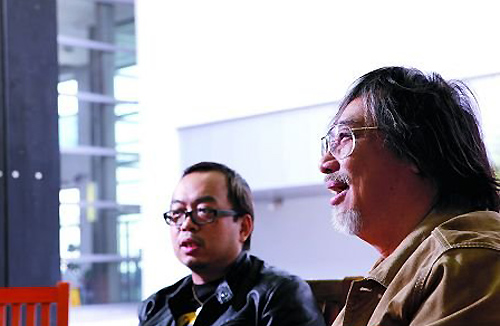 With the recent departure of numerous talented TVB producers, the quality of recent series have already been affected. Audiences fear that the standard will continue to deteriorate. It looks like TVB may be facing a very serious situation ahead.

Talented scriptwriter, Chow Yuk Ming (周旭明)–who has written many critically acclaimed series, including When Heaven Burns <天與地>, Healing Hands 3 <妙手仁心III>, and War and Beauty <金枝欲孽>–has announced his departure from TVB. As for the resignation of his frequent partner, producer Jonathan Chik (戚其義), it is still unclear for now.

A reporter contacted the TVB public relations manager, and he confirmed that the golden duo, Jonathan Chik and Chow Yuk Ming, are indeed leaving TVB. However, this will not affect the air date of Beauty at War <金枝欲孽（貳）>. “The series will not be shelved aside, and it also will not be aired in a bad time slot. TVB invested a large amount of money to produce this series, and there is no reason to do such a thing.”

Chow Yuk Ming said, “I am leaving TVB, but not for any of the three yet-to-be approved TV stations in Hong Kong. I planned to leave all along. Also the bad ratings of When Heaven Burns and Master of Play <心戰> have affected my mood quite a bit.” Chow felt a little disappointed with their poor ratings, but most importantly he is hurt because the Hong Kong audience did not really enjoy watching the two series. Since he cannot change the audience’s opinion, he will try his luck in another market. Chow wants to have the freedom to write and create his own ideas.

Chow said he will attempt to pursue a career in mainland China, and he has already signed a contract with a TV production company. He has already started preparing a script for a TV series. First, Chow will try to adapt to the new working environment, but he believes the current quality of mainland TV series is higher than Hong Kong’s TV series.  Although the subjects may be limited for him to write about, he will adjust to the changes.

As to whether Jonathan Chik is also leaving TVB, Chow explained that he is still wrapping up the post-production of Beauty at War, and he has not left the company yet. Jonathan’s situation is more complicated, but he shares the same desire to leave TVB. Chow worries that if Jonathan leaves TVB, the company may make a business decision to air Beauty at War in a bad time slot.

Chow believes that he and Jonathan share the same vision and idealism, and they will eventually collaborate together again. Jonathan Chik and Chou Yau Ming collaborated on the following series in the past:

1999 — Feminine Masculinity <先生貴性>, At the Threshold of An Era 創世紀>