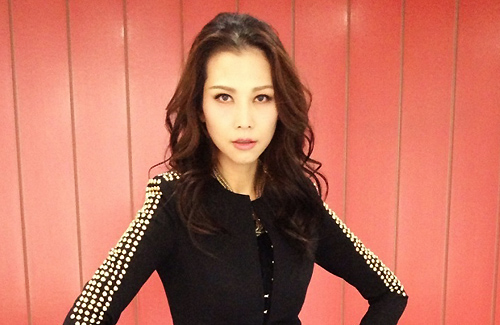 Now a mother to two daughters, Ada Choi’s (蔡少芬) current goal is to find a sense of balance in life between work and family time. She shared her experience as a mother, and spoke of future career opportunities. Despite being busy at home with two kids, her passion for acting has not died down one bit.

Happy to be back on the TVB screen this year in Beauty At War <金枝慾孽II>, Ada expressed she will definitely accept more dramas from the company as long as there are suitable costars and a good script. Although Beauty At War’s viewership rating dipped to an all-time low and was heavily criticized by the audience for its nonsensical plot, Ada loves the drama and believes it is of high quality.

Having to accompany her daughters to bed early each night, Ada has no time to catch up with TVB dramas. “I tell bedtime stories at 8:30 p.m. and sleep at 12 a.m. to watch movies and chat with my husband. Although I haven’t watched dramas in a while, I’ve heard about Brother’s Keeper <巨輪> and Triumph in the Skies 2 <衝上雲霄II>.” With the annual awards ceremony approaching, Ada believes Moses Chan (陳豪) has a high chance of being titled TV King this year. She laughed and expressed, “TV Queen should be me, because I did a great job!”

No Plans for Another Child

After becoming a mom, Ada also became a spokesperson for milk formula brands. She now has plenty of knowledge on how to take care of children and shared her experience with breastfeeding. When her first daughter was born, Ada decided to breastfeed her for nine months to ensure good nutrition. Her filming schedule made this difficult, so she had to squeeze and prepare the milk beforehand, which was a tedious procedure. Ada laughed and expressed her bone structure has also enlarged a bit after giving birth, but she does not mind. “Only my husband looks at my body figure. It’s okay as long as he tells me I look perfect.”

Since Ada’s elder daughter has developed a nose allergy, she must inhale steam to clear the nasal pathway. Once, a bottle of boiled water was knocked over and Ada immediately asked if her daughter was okay before taking care of her own burnt skin. Before she knew it, there was already a large blister on her leg. Protecting her children is Ada’s number one priority, and she feels a great sense of happiness whenever her elder daughter showers her with kisses and hugs.

However, Ada feels the great responsibility involved in raising children and has no plans to have another baby. Much energy is already spent on caring for her two daughters. Luckily, neither her husband nor mother-in-law is pressuring her to give birth to a son. “I really can’t bear the burden of three kids,” Ada revealed.

30 comments to Ada Choi Finds Harmony Between Career and Family